Given the tightly controlled nature of American Idol, it's a wonder that the televised talent contest has never produced a winner who specialized in country music, since there's no segment of modern popular music that is controlled tighter than contemporary country. Maybe this thought was in the minds of Simon Fuller and the rest of AmIdol's 19 management when they went into their fourth season in 2005, since as soon as fresh-faced Oklahoma blonde Carrie Underwood showed up in the audition rounds, the judges -- alright, specifically Simon Cowell -- pigeonholed her as a country singer, even if there was nothing specifically country about her sweet, friendly voice. From that point on, she was not only the frontrunner, but anointed as the show's first country winner, which apparently proved more enticing to the voters and the producers than the prospect of the show's first rock & roll winner in the guise of the Southern-fried hippie throwback Bo Bice. Which makes sense: cute, guileless young girls have a broader appeal than hairy 30-somethings. They're easier to sell and mold too, and Underwood proved particularly ideal in this regard since she was a blank slate, possessing a very good voice and an unthreatening prettiness that would be equally marketable and likeable in either country or pop. So, the powers that be decided that Underwood would be a contemporary country singer in the vein of Faith Hill -- she'd sing anthemic country pop, ideal for either country or adult contemporary radio, with none of the delightful tackiness of Shania Twain -- and her debut album, Some Hearts, not only hits this mark exactly, it's better than either album Hill has released since Breathe in 1999.

Which isn't to say that Carrie Underwood is as compelling or as distinctive as a personality or vocalist as Faith Hill: Underwood is still developing her own style and, for as good a singer as she is, she doesn't have much of a persona beyond that of the girl next door made good. But that's enough to make Some Hearts work, since she's surrounded by professionals, headed by producers Mark Bright and Dann Huff, who know how to exploit that persona effectively. While some of the songs drift a little bit toward the generic, especially in regard to the adult contemporary ballads, most of the material is slick, sturdy, and memorable, delivered with conviction by Underwood. She sounds equally convincing on such sentimental fare as "Jesus, Take the Wheel" as on the soaring pop "Some Hearts," and even if she doesn't exactly sound tough on the strutting "Before He Cheats," she does growl with a fair amount of passion. In fact, the worst thing here is her chart-topping post-American Idol hit "Inside Your Heaven," which is as formulaic as the mainstream country-pop that comprises the rest of Some Hearts, but with one crucial difference: the formula doesn't work, the song is too sappy and transparent, the arrangement too cold. On the rest of Some Hearts, everything clicks -- the production is warm, the tunes inoffensive but ingratiating, it straddles the country and pop worlds with ease, and most importantly, it's every bit as likeable as Carrie was on American Idol. Which means that even if she's not nearly as sassy or charismatic as Kelly Clarkson -- she's not as spunky as Nashville Star finalist Miranda Lambert, for that matter -- Carrie Underwood has delivered the best post-AmIdol record since Clarkson's debut. 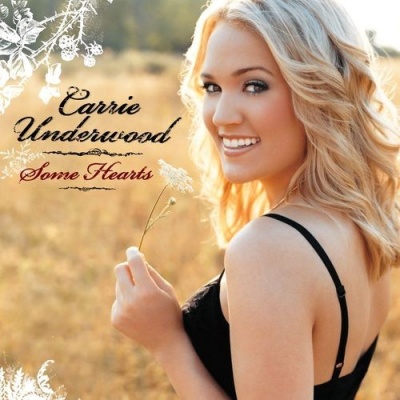