Considering how Cage the Elephant brought home the Best Rock Album Grammy for Tell Me I'm Pretty in 2017, it's a bit startling that its successor, Social Cues, abandons the rough-and-tumble aesthetic producer Dan Auerbach brought to the band. Auerbach helped Cage the Elephant emphasize the bash-around garage elements lurking within their music, a sensibility that is absent on Social Cues. CTE work with producer John Hill, who previously helmed albums by Florence + the Machine, for this 2019 album, but a better touchstone for what they're attempting to achieve is Beck, who appears on the single "Night Running" and joined the group on a co-headlining tour in support of the album. Particularly on Colors, the 2017 LP that snagged him a Grammy for Best Alternative Album, Beck specialized in a bright, vivid pan-cultural pop, echoes of which can be heard on Social Cues. Cage the Elephant also paints Social Cues with bold hues swiped from a primary palette, but they aren't especially interested in the here and now. While there may be some hints of modern flair on the margins -- they exhibit a particular fondness for drum machines -- Social Cues beats to a neon-lit pulse appropriated from the glory days of MTV. Such a bright glare evokes the '80s, but like all Cage the Elephant albums, Social Cues is a canny blend of familiar elements whose origin lies just out of reach. By making such a decisive shift in direction, CTE wind up dampening the squalls of White Stripes, Strokes, and Pixies that defined their first decade of records, but that change also emphasizes how the group are at heart pop-pastiche artists, favoring style and sound over a finely honed song. 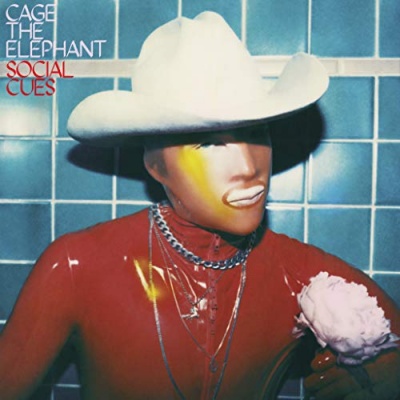