So Many Stars Review

So Many Stars is the kind of album you want to hate. The idea of blending Kathleen Battle's soprano voice with accomplished jazz musicians such as Grover Washington, Jr. and Cyrus Chestnut is the sort of idea that makes most serious music fans cringe. Surprisingly, Battle manages to pull it off. She succeeds because of her subdued approach, which is a bit of a surprise considering that the artist is best known for her raging temper. She takes on several familiar songs such as "Steal Away," "Going Home," and "The Little Horses," but never tries to overpower them. Equally impressive is her work on Spanish and Portuguese tunes such as "Azulão" and "Para Niñar." If most classical musicians took the kind of meticulous care that Battle does with So Many Stars, maybe the idea of crossover classical music would not be one that so many music lovers reflexively hate. 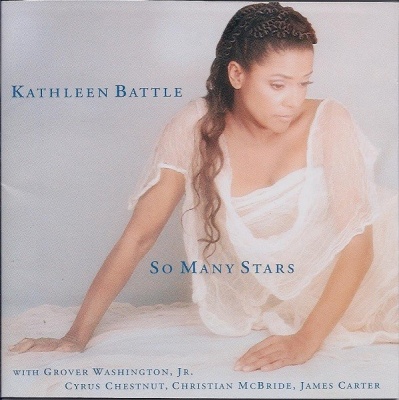 So Many Stars Album Information