Bette Midler's first songbook album focused on songs popularized by Rosemary Clooney, and it became a surprising hit after being latched onto by vocal fans as well as adult contemporary audiences. Befitting her image, the record wasn't a reverent tribute; Midler and musical partner Barry Manilow modernized the arrangements of Clooney's bigger hits, recasting "Come On-A My House" as a swing-hip-hop number and reimagining "This Ole House" as a bluegrass song. Midler's 2005 tribute to Peggy Lee is a more conservative affair, perhaps due to Lee's larger status in the realm of American song as compared to Clooney. That's not to say it's a disappointment; in fact, it's a talented, affectionate record that may not add much to the cause but is a solid tribute. Certainly Lee's image as the bemused, world-wise, sometimes sensual siren fits well with Midler's, and both have exhibited an excellent rhythmic sense. And the material helps Midler flaunt as only she knows how, from "Fever" to "Big Spender" to "I'm a Woman." While all of these contribute nothing more or less than Lee's versions, Midler does noticeably improve "Is That All There Is?," one of the most eccentric songs in Lee's repertoire. Her studied boredom in the verses is good enough, but when she reaches the uninhibited chorus, she reveals a marvel of catlike glee. The arrangements, most of them by Manilow, are very good, although they reveal a close knowledge of the originals that contributes to the reverence on display. 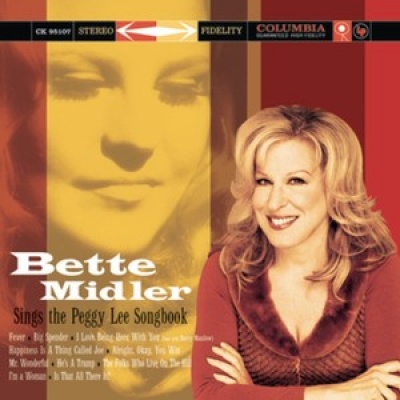