She Was Country When Country Wasn't Cool: Tribute to Barbara Mandrell Review

Barbara Mandrell is an excellent candidate for a tribute album: at her peak, she was a huge star, but these days, about 25 years after her heyday and about ten after she stopped recording regularly, she tends to be a little bit forgotten, so it's time to have the spotlight swing back her way via a superstar-studded album like She Was Country When Country Wasn't Cool. As if to prove the boast of the title, this tribute is filled with musicians with a stronger country pedigree than Mandrell ever had -- newcomers like Terri Clark, Brad Paisley, Blaine Larsen, Gretchen Wilson, and Dierks Bentley, who all have a harder country background than Barbara. Combine this with a couple of legendary superstars in Reba McEntire and Willie Nelson, and She Was Country has a stronger country kick than a tribute to this country-pop star should have, which also helps reveal how strong her songs were. Of course, there's a fair amount of pop here, too, coming from the likes of Sara Evans, LeAnn Rimes, Alabama's Randy Owen, and Kenny Chensey, while CeCe Winans manages to infuse "He Set My Life to Music" with a dose of authentic contemporary gospel. So, this is a more diverse set than it might initially seem, and it's also quite entertaining, since everybody involved gives a loose, enthusiastic performances that pays tribute without being overly respectful, and the result is a whole lot of fun. Unlike a lot of tribute albums, it never feels calculated or assembled with the charts in mind -- the music is at the forefront, and everybody turns in a good performance, winding up with an effective tribute to Barbara Mandrell that's also a strong album in its own right. 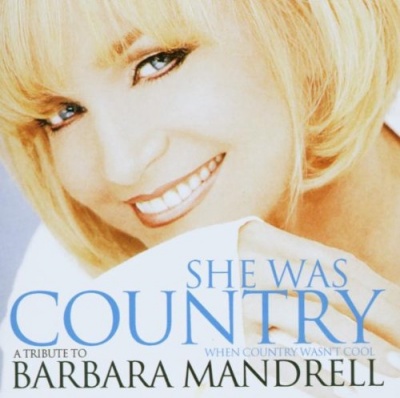 She Was Country When Country Wasn't Cool: Tribute to Barbara Mandrell Album Information