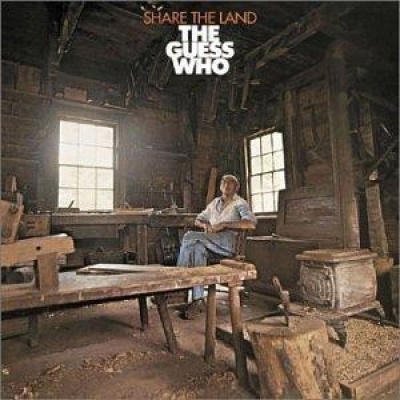 Recorded in the immediate aftermath of lead guitarist Randy Bachman's departure from the group, Share the Land was a better album than anyone could rightfully have expected, and it was the biggest selling original album in their entire output, appearing in the wake of "American Woman" and lofted into the Top 20 (with a lot of advance orders) with a pair of hits of its own. The music ranges from the catchy, anthem-like title tune to proto-metal excursions, with coherent digressions into blues and country ("Comin' Down Off the Money Bag"/"Song of the Dog"). Burton Cummings is in excellent voice on the lead vocals, and the other members provide some of the finest harmonies ever heard on a Guess Who album, on "Do You Miss Me Darlin'" and "Three More Days." The new double lead guitar team of Kurt Winter and Greg Leskiw gave the band a greater range than they'd ever had, moving freely in various rock and blues idioms, and the rhythm section was as solid as ever. That having been said, however, the music hasn't necessarily aged well (or, perhaps, those who've achieved a maturity level beyond age 18 have aged past it) -- listening to details such as Winter's shouts of "Freedom!" and "Paint me a picture" on "Three More Days," one can't escape the thought that at least half of this album not only wasn't aimed at the overachieving end of the high school and college populations, but was aggressively not aimed at them. And from here on, beyond whatever virtuosity the members brought to their sound, it seemed as though the group was working from formula rather than inspiration. The fall 2000 reissue on the Buddha label features a high-resolution remastering, and includes a pair of very good lost numbers from the early sessions for the record, "Palmyra" and "The Answer," featuring Bachman on guitar.