On his fifth studio album, 2021's hooky Saturday Night, Sunday Morning, British singer/songwriter Jake Bugg embraces a robust, mainstream pop/rock vibe that still retains some of his vintage inspirations. Produced by Steve Mac (Ed Sheeran, Paloma Faith, 5 Seconds of Summer), Saturday Night, Sunday Morning is more dynamic album than Hearts That Strain, but one that trades that set's yearning AM pop intimations for stomping anthems that wouldn't sound out of place on a Fitz and the Tantrums record. It's a sound that makes some sense for Bugg, whose early work conjured a precocious blend of '60s folk icon Donovan with the amped-up swagger of Oasis. Saturday Night, Sunday Morning is perhaps his best balance of those two touchstones, even as it lacks some of the sincerity and lyricism that made 2017's Hearts That Strain such a welcome surprise. The rambling, acoustic fingerpicking of "Hold Tight" is the closest moment to Hearts that Strain, and one that also evokes the low-key acoustic blues and folk of his first few albums. There are several other vintage-inspired moments, including the '70s Bee Gees-esque balladry of "Scene" and the Roy Orbison-sounding "Maybe It's Today." Tracks like "About Last Night" and "Rabbit Hole" are also catchy as Mac frames Bugg's sweet croon with garagey, Arctic Monkeys-style electric guitar riffs. The songs on Saturday Night, Sunday Morning are the kind you could easily see getting placed in the background of TV shows or used in commercials. Taken on their own, these are fine songs and Bugg's reedy alto is showcased to nice effect throughout. They might even help broaden his listenership into the Killers territory. Undoubtedly, Saturday Night, Sunday Morning is the culmination of Bugg's rise to mainstream success. Whether it works for you or not, it's an undeniable achievement. 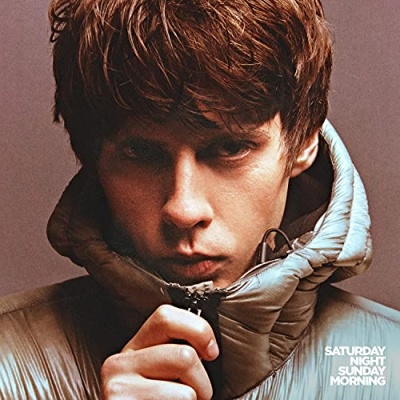