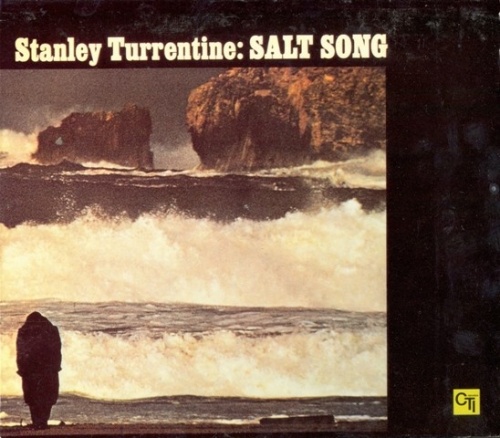 Stanley Turrentine's stint with Creed Taylor's CTI label may not have produced any out-and-out classics on the level of the very best LPs by Freddie Hubbard, Hubert Laws, or George Benson, but the bluesy tenorist's output was consistently strong and worthwhile for all but the most stridently anti-fusion listeners. Salt Song was Turrentine's second album for CTI, and while it's perhaps just a small cut below his debut Sugar, it's another fine, eclectic outing that falls squarely into the signature CTI fusion sound: smooth but not slick, accessible but not simplistic. In general, keyboardist Eumir Deodato's arrangements have plenty of light funk and Brazilian underpinnings, the latter often courtesy of percussionist Airto Moreira. The first three cuts are the most memorable, beginning with a ten-minute exploration of the abrupt time signature shifts of Freddie Hubbard's "Gibraltar." Though a hard bop version might have returned to the theme a little less often, Turrentine's solo sections are full of ideas, befitting one of his favorite pieces of the period; plus, guitarist Eric Gale shines as both a rhythm and lead player. The traditional gospel tune "I Told Jesus" features Turrentine at his bluesiest and earthiest, with snatches of ethereal choir vocals floating up behind him. Milton Nascimento's title track, naturally, has the strongest Brazilian flavor of the program, and Turrentine skillfully negotiates its frequent shifts in and out of double time. The 1997 CD reissue also includes Nascimento's "Vera Cruz" as a bonus track. All in all, Salt Song has dated well, partly because the arrangements don't overemphasize electric piano, but mostly on the strength of Turrentine's always-soulful playing.