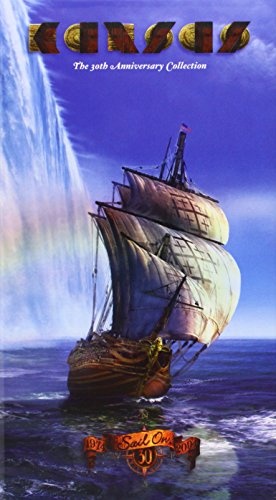 At the Office Imagination Housework

Sony's Sail On: The 30th Anniversary Collection 1974-2004 is certainly the most lovingly crafted of the many Kansas retrospectives. Featuring 27 album cuts that range from classic FM hits like "Dust in the Wind" and "Point of No Return" to fan favorites such as "Song for America," a 35-page booklet that includes extensive liner notes and career-spanning photos, and a 16-track DVD that collects numerous television appearances, videos, and live recordings, Sail On seems to be the definitive tome of the Midwest art rock band's very existence. The album tracks are dished out in a linear fashion, making Bret Adams' interviews with the rotating cast of bandmembers all the more resonant, and the much needed remastering -- the band's first two albums arrived in this form a month before -- crackles with the kind of indulgent glee that can only come from the combination of crispy Hammond B-3 riffing over crafty mid-'70s time signatures. There's not much new here for fans who bought 1994's Box Set besides the additional DVD and the inclusion of five tracks from albums released on post-Epic/Legacy labels MCA, Intersound, River North, Diablo, Compendia Music, and Magna Carta, but for fans who have yet to upgrade their Columbia House copy of The Best of Kansas -- with its inevitable scratches and fingerprints from late-night/post-bar fumbling -- Sail On may open up a whole new world of appreciation for this tenacious group of prog-pop gentlemen.