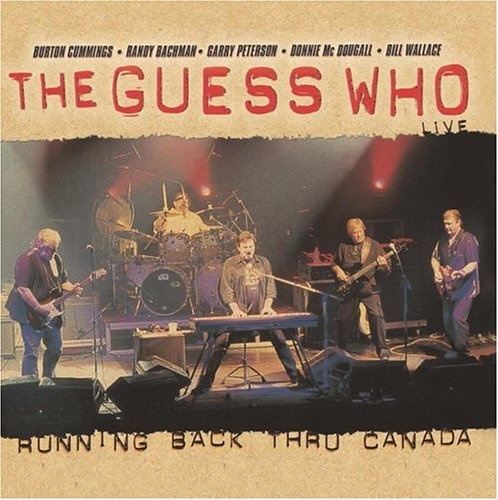 Unlike many of the band's contemporaries who trudge out on the road decades removed from hit-making relevance with stand-in scabs replacing former members, Running Back Thru Canada is a fairly authentic version of the Guess Who. Joining classic members Burton Cummings, Randy Bachman, and Garry Peterson is guitarist Donnie McDougall and bassist Bill Wallace, both of whom can chart their involvement in the group way back to 1972, when they replaced Greg Leskiw and Jim Kale, respectively. This lineup is far from an insult to the band's integrity and their fans' intelligence, a refreshing change from dubious cash-ins such as The Spirit Lives On: Greatest Hits Live (with only Peterson and a currently-erstwhile Jim Kale as noteworthy performers) and a dozen or so best-of compilations. Running Back Thru Canada commemorates, as the title suggests, the Guess Who's reunion run through the Great White North (and a few U.S. dates) in the summer of Y2K. The liner notes affirm what the listeners ears will suspect: that the live tracks are culled from several shows and not a single performance, giving it a professional feel to separate from a bootleg, but also a slightly (but not unpleasantly so) disjointed feel in the track transitions. This double-disc isn't Live at the Paramount and doesn't profess to be. But it does a nice job of displaying a good chunk of Guess Who hits, a few surprises, such as the blues run-through of "Albert Flasher" and, most notably, an string of acoustic tracks at the end of the first disc dubbed "The Coffee House" according to the liner notes. Some fans might feel put-off by the likes of "No Sugar Tonight" and "Let It Ride" done in this manner, but the crowd response shows they are probably in the minority. It's still not a substitute for the classic Guess Who experience, but it does nothing to tarnish the reputation of one of Canada's greatest rock & roll acts, which is not nearly as damning praise as it sounds since it's no mean feat.