Rossini's Il viaggio a Reims may be the first postmodern opera in terms of the self-referentiality of its libretto: it was written about a future event -- the coronation of Charles X of France in 1825 -- to be performed as part of the celebration surrounding the coronation itself. The libretto, by Luigi Balocchi, is one of the silliest and most convoluted, but genuinely wittiest, Rossini ever set (which is saying something!) and the composer responded with an outpouring of inspiration that's fully appropriate to the giddiness of the story. The plot concerns a group of various European aristocrats on the way to the coronation in Rheims who are stranded in a hotel a day's journey away because of a lack of horses to transport them. Various romances and rivalries transpire while they try to sort out the dilemma, which they eventually resolve by pooling their resources and having a big party. Rossini was able to capitalize on the wealth of opera stars who would be in Paris for the festivities following the coronation, so the opera is packed with dazzling roles for virtuosi of the highest caliber and includes one ensemble for 14 solo voices. The score shows the composer at the height of his powers; the plot is negligible and there are far too many characters to be able to keep track of, but there is plenty of reward in just sitting back and letting the delightful, ingenious, and often melodically gorgeous music just wash over you. Claudio Abbado leads the Berlin Philharmonic in a performance that's delicate, fleet, and rambunctious, which is perfectly suited to the spirit of the score. The 16 soloists are superb -- there's not a weak link in the lot -- but Sylvia McNair stands out for her limpid portrayal of the poetess Corinna. The singers fully inhabit their roles, and the performances are full of wit, as well as being beautifully sung. The sound is good for a live recording, with fine balance and a minimum of background noises. The CD should be of strong interest to fans of Rossini, bel canto opera in general, and operatic comedies that are actually fun. 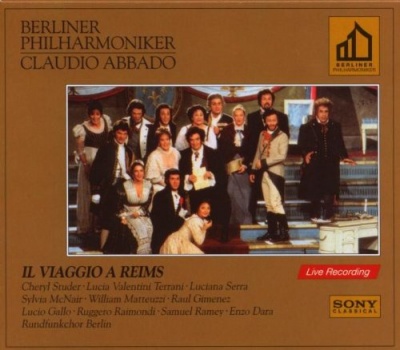