The most popular and successful lineup of Return to Forever -- Chick Corea, Stanley Clarke, Lenny White, and Al Di Meola -- was coming off the Grammy-winning No Mystery when it recorded its third and final album, Romantic Warrior. It has been suggested that in employing a medieval album cover (drawn by Wilson McLean), using titles like "Medieval Overture" and "Duel of the Jester and the Tyrant," and occasionally playing in a baroque style, particularly in Clarke's "The Magician," Corea was responding to Rick Wakeman's successful string of albums on similar themes. Certainly, the music suggests that the musicians have been listening to Wakeman's band, Yes, among other progressive rock groups. But they bring more of a traditional jazz approach to their sound, particularly in the opening statement of intent "Medieval Overture" and the original side one closer, "The Romantic Warrior," both of which feature extensive acoustic piano soloing by Corea. The original side two -- Di Meola's "Majestic Dance," "The Magician," and "Duel of the Jester and the Tyrant" -- is much more in a jazz-rock style, with Di Meola particularly rocking out on extensive, fast-paced electric guitar solos. Meanwhile, the rhythm section of Clarke and White is always extremely busy, maintaining a funky, driving pulse and several cross rhythms no matter what's going on above it. This is particularly noticeable, naturally, on White's sole composition, "Sorceress," but it continues to keep the music in the fusion camp even when Corea is sounding like a more traditional jazz pianist. Romantic Warrior is the sound of a mature band at the top of its game, which may help explain why it was Return to Forever's most popular album, eventually certified as a gold record, and the last by this assemblage. Having expressed themselves this well, they decided it was time for them to move on. 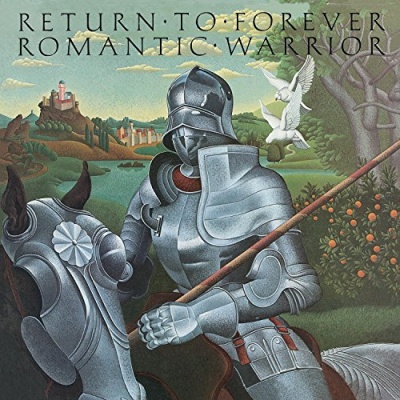