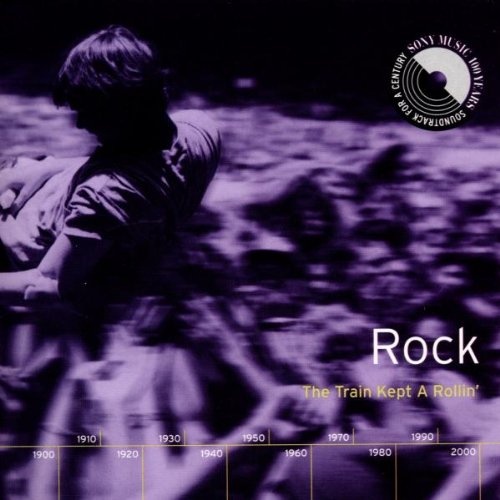 To commemorate the end of the century, Sony Music assembled the 26-disc box set Sony Music 100 Years: Soundtrack for a Century. The title was imposing, as was the idea behind it -- to chronicle the life of the oldest record label in the music industry. To be clear, Sony Music has not existed for 100 years, but the heart of its catalog, Columbia Records, was founded early in the 20th century. Sony realized that most consumers wouldn't invest in a 26-disc box, no matter how impressive it was, so they simultaneously released a series of 12 genre-specific double-disc sets that culled highlights from the box. As it turns out, the double-disc sets are every bit as impressive as the big box, perhaps more so, because they're easily digestible. Even so, the scope of the 40-track Rock: Train Kept a Rollin' is impressive. Columbia didn't really have a lot of rock & roll acts in the late '50s and early '60s -- the record industry was different then, and the label was a little too established to endorse something that was still seen as a fad (not to mention that most rock & rollers were on independent upstarts). Appropriately, Rock: Train Kept a Rollin' begins in 1964 with Bob Dylan's "Subterranean Homesick Blues" -- not only the moment Dylan went rock on record, but one of the first true rock records on the label. From that point on, things were different for Columbia and its subsidiaries, and they eventually amassed a catalog filled with commercial and artistic heavy-hitters, such as the Byrds, the Yardbirds, Moby Grape, Jeff Beck, Sly & the Family Stone, Santana, Mott the Hoople, the Stooges, Bruce Springsteen, Boston, Aerosmith, Cheap Trick, Meat Loaf, Elvis Costello, the Clash, Journey, Midnight Oil, Pink Floyd, Ozzy Osbourne, Soul Asylum, Pearl Jam, Alice in Chains, Rage Against the Machine and Oasis. Those bands, along with a handful of others, make Train Kept a Rollin' an eclectic listen, to say the least, but the remarkable thing is, not only is it really entertaining, but it winds up being pretty representative of nearly four decades of rock history. True, it's not definitive, but it does something better -- it captures the feel and the evolution of rock over the years, and it does so by drawing from a handful of related labels.