Rize of the Fenix Review

It's no mystery why Tenacious D call their third album Rize of the Fenix. JB and KG suffered the slings and arrows of outrageous fortune when they unleashed The Pick of Destiny in 2006, a feature film -- complete with an accompanying soundtrack -- that netted approximately no new fans and may even have cost them a few. Well aware of this bomb, it's imperative that the D fashion their third album -- arriving a long six years after Pick -- as a triumphant comeback, a Fenix rising from the ashes, if you will. And, for the most part, the D do succeed, the best moments of Rize of the Fenix easily flattening the bloat of The Pick of Destiny. If they happen to lose a bit of their sense of rampaging grandeur, they compensate with tightly constructed epics that impress by their lack of fat: the title-track suite gallops along with purpose, "To Be the Best" is a gleeful send-up of "The Power" (animated Transformers by way of Boogie Nights), "Roadie" is a heartfelt salute to its overlooked namesake, and country-rock closer "39" is an ode to an aging groupie. This is all, in the parlance of another of the album's highlights, "Low Hangin' Fruit." Tenacious D don't stray from their songs of rock & roll and songs of themselves, but considering the pit that they were in, they can't be faulted for being overly careful, even if that caution can make parts of the album -- namely the spoken skits, the staged blow-ups between Hollywood Jack and Rage Kage, and a few of the songs about rocking -- feel a little long in tooth. Nevertheless, Rize of the Fenix does amount to a rousing comeback for Tenacious D: they're back to their old tricks, oblivious to whether the world at large actually cares about their shenanigans. 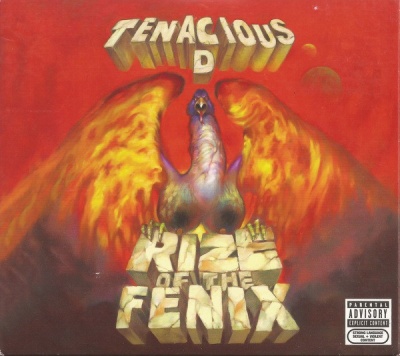 Rize of the Fenix Album Information