Billy Joel had never taken as much time to record an album as he did with River of Dreams, and its troubled birth is clear upon the first listen. Never before had he recorded an album that sounded so labored, as if it was a struggle for him to write and record the songs. With River of Dreams, he's surrounded himself with ace studio musicians and star producer Danny Kortchmar, all of whom have the effect of deadening an already self-consciously serious set of songs. There are no light moments on the album, either lyrically or musically -- all the songs are filled with middle-age dread, even the two best moments, the gospel-inflected title track and his song to his daughter, "Lullabye (Goodnight, My Angel)." Those two songs have the strongest melodies, but they're not as natural as his best material. Everywhere he tries too hard -- the metaphors of "The Great Wall of China," the bizarre vocal intro to "Shades of Grey," minor-key melodies all over the place. He may be trying different things, but he doesn't sound comfortable with his detours, and by the end of the record, he sounds as exhausted as the listener feels. By that point, the closing track, "Famous Last Words," seems prophetic -- River of Dreams feels like a sad close to an otherwise strong career, and from all indications he's given in the press, Joel claims it is indeed the last pop album he'll ever make. It's an unworthy way to depart. 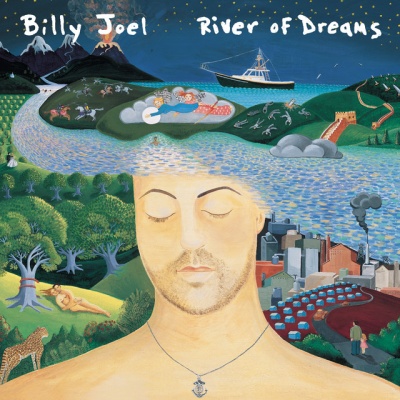