German heavy metal icons the Scorpions hit the 50-year mark in 2015, being initially conceived all the way back in 1965 by a 16-year-old Rudolf Schenker as a beat band very much in line with the trends of the time, and slowly evolving into a hard rock force to contend with by the end of the '70s. Multi-platinum-selling singles and omnipresent commercial success peaked out for the Scorpions sometime in the early '80s, but they kept the flame alive for a dedicated army of followers for decades to come. Return to Forever is the band's 18th album of new studio material, following 2010's Sting in the Tail. While many of the group's '90s and 2000s efforts experimented with stylistic divergences or convoluted concept record themes, Sting in the Tail was a declarative return to the radio metal roots of the band's most popular work from the '80s. Return to Forever follows suit very much, with the 12 new songs here embodying the same over the top celebration and hedonistic revelry of a much younger Scorpions. At times the throwbacks are a little transparent. The gated reverse-reverb thump of the floor tom that propelled the band's 1984 über-hit "Rock You Like a Hurricane" shows up again on the anthemic chorus of "We Built This House." Power ballad "House of Cards" is constructed from the same formula of haunting minor-key chords and wailing feedback in the background that made "Winds of Change" a worldwide hit in 1991. Luckily, the energy of Return to Forever is all fun and swagger, not diminished at all by the '80s hair metal nostalgia trip that serves as its foundation. Production handled by longtime Scorpions collaborators Mikael Nord Andersson and Martin Hansen replaces some of the thin production choices of the '80s with smarter arrangements and better sound on radio-ready pop-metal jams like "Rollin' Home" and more introspective tunes like "Eye of the Storm." The songwriting here is on par with some of the band's best work, which figures, as they've been working in a field they helped originate for decades. Fans of the band's best-loved material will immediately connect with the fun-loving party burners and soft-edged power balladry of the album, all leaning just enough on the band's own storied past for influence but inspired enough to avoid dipping into self-parody. They pretty much wrote the book on sleazy FM radio metal, so in the case of revisiting their glory days on Return to Forever, who's to blame the Scorpions for taking a few pages from the book they wrote themselves? 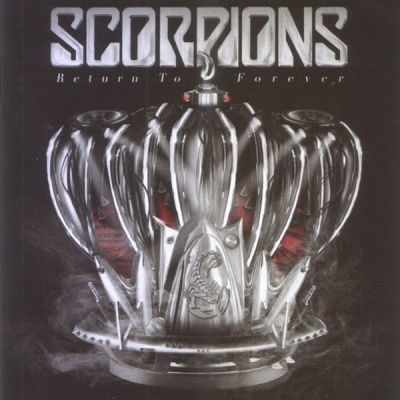