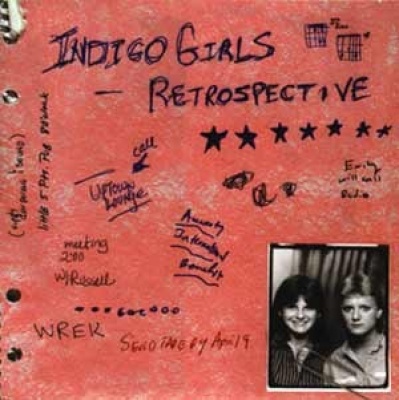 The Indigo Girls' 1999 album Come on Now Social was their first commercial failure after six consecutive gold or platinum albums. The appearance of the duo's first domestic compilation a year later is an unavoidably ominous sign, as their label takes its profits while it can. But that's no reason not to celebrate Amy Ray and Emily Saliers' remarkable run of high-quality recordings dating back to 1987's Strange Fire. Most of the songs with which they are most readily identified are included, among them the two chart singles "Closer to Fine" and "Galileo." (The only missing title that earned significant airplay is "Hammer and a Nail.") Feminist author Susan Faludi properly contextualizes the Indigo Girls in her liner notes as a group that created an assertive, independent female response to the Reagan-Bush era. But that aspect of their work was always framed by the music itself, dominated by their interweaving acoustic guitars and voices, and the commitment with which they sang. That combination of substance and fervor characterized the Indigo Girls' work, even when their songwriting flagged occasionally or their sound became repetitive. Retrospective captures the highlights of their work from 1987 to 1999, but proceeding chronologically, it also traces the changes that may have hurt the duo commercially by the end. Gradually, their politics became more explicit, which always tends to splinter an audience (though, of course, their views were not secret to their many fervent fans). And in their search for different sounds, they sometimes subverted their basic two-voices, two-acoustic-guitars identity. It remains possible that the Indigo Girls will continue to score good, consistent sales, and the two new songs suggest that there's still creative fuel for this group to burn. But if they have crested, Retrospective confirms their status as one of the most accomplished recording units of their time.