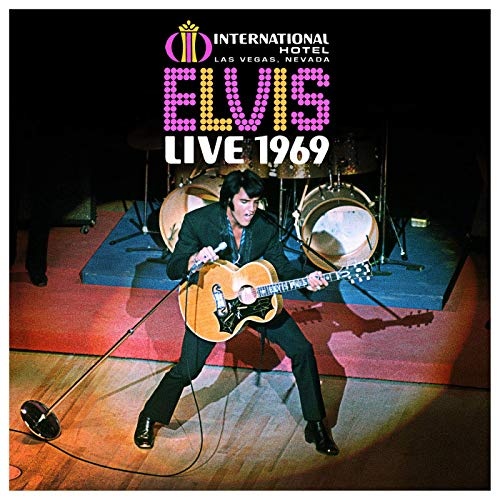 Elvis Presley's comeback of the late 1960s is often reduced to his spectacular reemergence in 1968, an event designed for a mass audience watching at home on television. That NBC special from December 1968 certainly earned the attention of an audience who hadn't paid attention to Elvis in years, but in many ways, Presley's real comeback didn't happen until 1969. During 1969, he recorded a series of sessions with producer Chips Moman in American Sound Studio, music that put him firmly at the crossroads of contemporary pop, rock, soul, and country while also reviving his commercial fortunes. Just as importantly, Presley didn't limit his comeback to the studio: he performed on-stage for the first time in eight years.

The vehicle for Presley's return to the stage was a four-week residency at the brand-new International Hotel in Las Vegas, where he played two shows a night for seven nights a week during the month of August. Highlights were rushed into the store in the form of From Memphis to Vegas/From Vegas to Memphis -- a two-LP set that paired the live record with a platter of selections from the American Sound session -- and other recordings trickled out over the years, but the 2019 set Live 1969 is the first serious archival release of this pivotal event in Presley's history. Live 1969 presents 11 full shows from this run, including two shows that are entirely unreleased. The set's comprehensiveness is a blessing, as it is both generous and intelligently assembled, yet its thoroughness does mean that the box doesn't lend itself to binge listening. Presley's sets were largely static, as was his stage banter. By the second disc, it's clear that he has a stockpile of jokes about Gatorade and Kirk Kerkorian, and that he'll change the lyrics to "Heartbreak Hotel" to "you'll be so horny, you could die." Such groaners provided fodder for years of dismissive jokes about Presley's Vegas years, jokes which implied that Elvis was a spent force, but the entirety of Live 1969 offers proof otherwise. Taken individually, as a concert at the time, the music is wonderful. Working with a band highlighting guitarist James Burton, Presley is clearly invigorated by performing music in front of an adoring audience. He's playing with the crowd, enticing shrieks and gales of laughter, but he seems to get more sustenance by singing with a live band. This is especially true of the clutch of new songs from 1969, a songbook which includes "In the Ghetto" and "Suspicious Minds," the latter given an epic seven-minute treatment every night. Here, Presley is thoroughly invested in his performance, while also figuring out how to perform as a mature musician, not a young firebrand. He's turning himself into a showman, one who makes corny jokes and pours his heart out on-stage. Listening to that evolution on Live 1969 is a riveting experience.