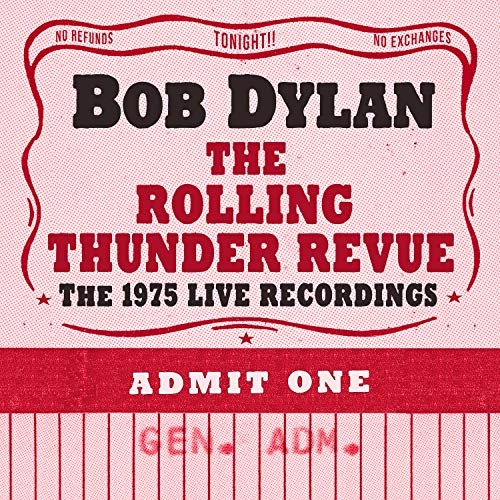 The Rolling Thunder Revue era in Bob Dylan's career maintains a central place apparently. The 14-disc Rolling Thunder Revue: The 1975 Live Recordings is the third release in his catalogue to document it. The first was Hard Rain, for a 1978 television special. 2002's double-disc Bootleg Volume 5 compiled selected performances from the first leg of the tour. This box offers five complete Dylan concerts from 1975: four from Massachusetts, one from Montreal, three discs of rehearsals, and a disc of rarities. 119 of 148 tracks were previously unreleased. The package includes many deluxe photos and a brilliant liner essay from Wesley Stace. Shows were announced shortly in advance of bookings in small venues, including a stage at a mahjong convention. The music crisscrosses Dylan's past and present, and features a star-studded cast: Joan Baez, Roger McGuinn, Ramblin' Jack Elliott, Joni Mitchell, Allen Ginsberg, Bob Neuwirth, Scarlet Rivera, Ronee Blakley, T-Bone Burnett, Mick Ronson, Steven Soles, Rob Stoner, Howie Wyeth, and David Mansfield. Dylan's face was covered by a mask or greasepaint, his head by an enormous gaucho hat adorned in flowers, all captured by a camera crew shooting what would become the four-hour Renaldo and Clara film. This ramble was a precursor for the ongoing Neverending Tour. It followed the release of Blood on the Tracks, and preceded Desire and Street Legal, the most musically diverse period in Dylan's career.

Two of the three rehearsal discs from S.I.R. studios are worthy of a cursory listen, especially "Rita May," "People Get Ready," and incomplete takes of "Hollywood Angel," and "Gwenevere." The third disc is better and offers fine takes of "Easy and Slow," "One More Cup of Coffee," and "Hurricane." The shows follow an equally loose format but are more kinetic. While the track list doesn't change much night to night, arrangements do. Among the many highlights are re-visioned versions of "The Lonesome Death of Hattie Carroll," "I Shall Be Released," and Blowin' in the Wind." Each night's gig ended with the ensemble offering Woody Guthrie's "This Land Is Your Land" as a closer -- there were no encores. As concerts progress, the band gets tighter. The final two shows in Boston and Montreal deliver sometimes-revelatory performances of "Hurricane," "Tangled Up in Blue," "Tonight I'll Be Staying Here with You," and "Isis." There are also true gems on the final "Rare Performances" disc: Alongside "One Too Many Mornings" (captured at Gerte's Folk City) and "The Ballad of Ira Hayes" (from the Tuscarora Reservation) are wily covers of Hank Williams' "Your Cheatin' Heart" and shambolic reads of the folk song "Jesse James" and Smokey Robinson's "Tracks of My Tears." Some material appears in Martin Scorsese's Netflix film Rolling Thunder Revue: A Bob Dylan Story. The concerts all have excellent sound. While this box is only essential for hardcore Dylanophiles, it's immeasurably valuable for the way it illuminates a wildly spontaneous period in the songwriter's career.