Widely considered the pinnacle of speed metal, Reign in Blood is Slayer's undisputed masterpiece, a brief (under half an hour) but relentless onslaught that instantly obliterates anything in its path and clears out just as quickly. Producer Rick Rubin gives the band a clear, punchy sound for the first time in its career, and they largely discard the extended pieces of Hell Awaits in favor of lean assaults somewhat reminiscent of hardcore punk (though distinctly metallic and much more technically demanding). Reign in Blood opens and closes with slightly longer tracks (the classics "Angel of Death" and "Raining Blood") whose slower riffs offer most of the album's few hints of melody. Sandwiched in between are eight short (all under three minutes), lightning-fast bursts of aggression that change tempo or feel without warning, producing a disjointed, barely controlled effect. The album is actually more precise than it sounds, and not without a sense of groove, but even in the brief slowdowns, the intensity never lets up. There may not be much variation, but it's a unified vision, and a horrific one at that. The riffs are built on atonal chromaticism that sounds as sickening as the graphic violence depicted in many of the lyrics, and Kerry King and Jeff Hanneman's demented soloing often mimics the screams of the songs' victims. It's monstrously, terrifyingly evocative, in a way that transcends Reign in Blood's metal origins. The album almost single-handedly inspired the entire death metal genre (at least on the American side of the Atlantic), and unlike many of its imitators, it never crosses the line into self-parodic overkill. Reign in Blood was a stone-cold classic upon its release, and it hasn't lost an ounce of its power today. 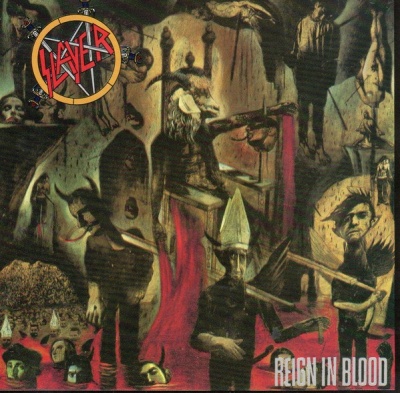