SOiL's second J LP kicks off with "Pride" and the title track "Redefine," two of the cleanest cuts of metal meat to ever peel from the post-grunge femur. Both feature flat, cutting guitar riffs boiling over stomping percussion; vocalist Ryan McCombs seems to tear out, chew up, and ultimately swallow the sinewy remains of his own Adam's apple. The tracks belong in that post-grunge hall of heroes alongside Saliva's "Click Click Boom" and Drowning Pool's "Bodies," songs that transcended genre cliché with brute force and real groove. (SOiL make a point of remembering Drowning Pool's Dave Williams in their liners.) The remainder of re.de.fine can't fully sustain its initial energy. But while SOiL pay heavy dues to Alice in Chains ("Something Real") and Korn ("Cross My Heart," "Love Hate Game") throughout, McCombs and guitarists Shaun Glass and Adam Zadel consistently generate their own brand of caustic heat. "Suffering"'s huge hammer-down riff anchors the album's midsection, while the conventional crawl of "Remember" is saved by interesting chorus dynamics and a squalling six-string breakdown. "Say You Will" even recalls the growl and classicist pacing of Judas Priest. It's in these moments that SOiL claw their way out of the post-grunge production pit, that slick, slimy place where records like this battle for the wallets and souls of the Ozzfest faithful with sound-alike mixing and radio-ready, oddly empty melodies. Too many bands rely on that studio trickery to take them places. On the contrary, SOiL actually seem held back by it. As initial blasts like "Pride" prove, they have the grit and gusto to redefine themselves outside of that dark cash-in place, while still sating listeners who don't care to leave it. 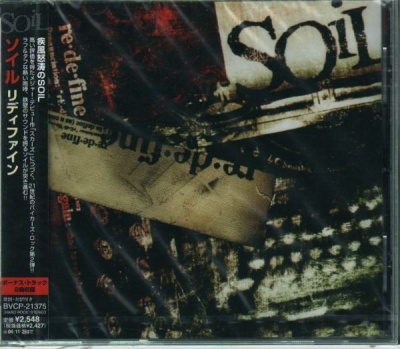