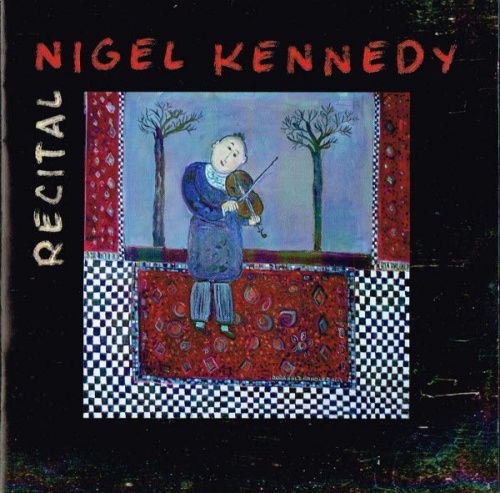 Classical music fans have long had the pleasure of indulging in spirited disagreements about the playing of British violinist Nigel Kennedy. He doubtless has the popular touch and has made some of the best-selling classical recordings of all time. He is also outrageous for the sake of being outrageous, gleefully insensitive to period styles, and all in all more interested in drawing attention to himself than to the music. One could, of course, make the argument that these are qualities classical music desperately needs right now, and plenty of buyers have clearly drawn that conclusion. At any rate, jazz lovers can now enjoy the same disagreements. Kennedy's no stranger to jazz, having become interested in the music as a teen and been forced to give it up by his teachers at the Juilliard School (which may explain a lot). The bland title Recital is ironic indeed, for Kennedy is not reciting anybody else's music: it's all his. There are a couple of Bach pieces marked simply "Allegro" and "Vivace," with familiar Bach pieces bumping up against, respectively, Brazilian and African rhythms. The works by Fats Waller, Dave Brubeck, and other jazz players (there are a couple of Kennedy originals too) don't feel like jazz; Kennedy gives them a showy, jittery quality that is miles from the generally cool ethos of jazz, and they depart even more than the word "jazz" might reasonably imply from the originals. They will also, except for Kennedy's confirmed detractors, be a great deal of fun, and it's remarkable how edgy this artist has continued to be after all these years. You pay your money, and you take your choice.