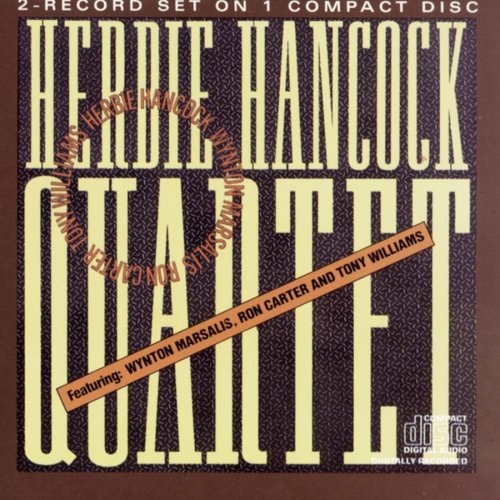 This is an extremely symbolic album, for Herbie Hancock and the V.S.O.P. rhythm section essentially pass the torch of the '80s acoustic jazz revival to the younger generation, as personified by then 19-year-old Wynton Marsalis. Recorded during a break on a tour of Japan, a month before Marsalis made his first Columbia album, the technically fearless teenaged trumpeter mostly plays the eager student, imitating Miles, Freddie Hubbard, and Clifford Brown, obviously relishing the challenge of keeping up with his world-class cohorts. Things start out conventionally enough with a couple of Monk standards, and then they progress into the mid-'60s Miles Davis post-bop zone, with Ron Carter and Tony Williams driving Marsalis and Hancock relentlessly forward. Several staples from the Miles/V.S.O.P. repertoire turn up ("The Eye of the Hurricane," "The Sorcerer," "Pee Wee"), and there is one wistful ballad, "I Fall in Love Too Easily," where Marsalis sounds a bit callow, not yet the master colorist. Hancock remains a complex, stimulating acoustic pianist, the years of disco having taken no toll whatsoever on his musicianship. This looked like it would be a Japan-only release, but since the buzz on Marsalis was so loud, CBS put it out in the U.S. in 1982, fanning the flames even more.