Primera Fila, the first-ever live album of Thalía's two-decade career, is something of a revelation, an "unplugged" acoustic album of mostly new material that is among her best full-length releases to date and certainly the most astonishing. The strength of the album comes as a surprise in part because Thalía isn't known as an especially gifted singer and in part because her career had been on the skids for years. No question about it, Thalía is better known as a celebrity than singer. For one, she's strikingly beautiful, a mainstay of People en Español's 50 Most Beautiful People issue whose endorsements range from clothing and accessories to beauty products and self-help books. She rose to fame as a member of the teen pop supergroup Timbiriche, rose to superstardom as a telenovela actress, and later, after she'd gotten her solo career well of the ground, married Sony Music executive Tommy Mottola, the ex-husband of Mariah Carey. Consequently, her celebrity often trumps her music, most of which was overseen by hitmakers Emilio Estefan, Jr. and Estéfano, who perhaps unfairly got a lot of the credit for her success. Thalía's reputation as a singer wasn't helped by her faltering commercial success in the mid- to late 2000s, when the Estéfano-produced El Sexto Sentido (2005) and the Estefan-produced Lunada (2008) both sputtered in the marketplace. While those albums weren't all that bad but rather spotty, over-produced, and in the case of Lunada, poorly promoted, they clearly failed to meet expectations and brought Thalía's long-running association with EMI to a sure demise. She subsequently switched to her husband's label, Sony Music, and came up with Primera Fila, which at first seems like a bad idea: Thalía unplugged? Nevertheless, it works better than one might imagine.

Recorded in Miami, FL, in front of a small invitation-only audience at the BankUnited Center over the course of two nights on July 29 and 30, 2009, Primera Fila finds Thalía performing a 13-song set of mostly new material, plus a greatest-hits medley and a couple choice covers as an encore. Thalía is credited with co-writing a couple of the new songs ("Cómo," "Ya Lo Sabía") with singer/songwriter Leonel García of Sin Bandera, yet most come courtesy of hired hands, most notably Reyli Barba ("Enséñame a Vivir"), Espinoza Paz ("El Próximo Viernes"), Mario Domm of Camila ("Equivocada"), and Joan Sebastían ("Con la Duda"), the latter of whom shows up for a duet. The mid-album greatest-hits medley is a nice reminder of Thalía's past as a Mexican dance-pop prima donna, the classic "Amor a la Mexicana" in particular, and how different in tone her past work is from Primera Fila. Among the cover songs, the highlight is a rocking version of Ricardo Arjona's "Mujeres" that closes the album on a high note. In the end, Primera Fila just might be Thalía's most impressive album to date, not only from a musical entertainment standpoint but also in how it showcases her talent as a performer who can deliver the goods outside of a recording studio. If anything, it should silence the naysayers and reestablish Thalía as one of Latin pop's brightest stars. 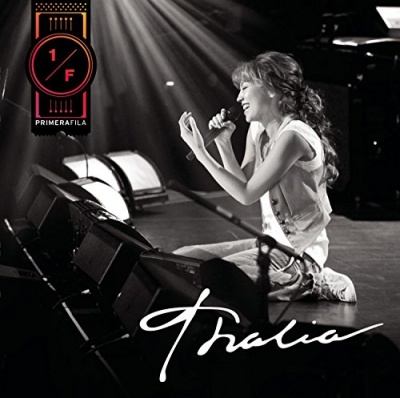