At a time when record companies are joining forces to produce million-selling hits anthologies like the Now and Totally Hits series, Columbia Records goes it alone on this compilation, which demonstrates that the venerable label has scored successes in a variety of genres and on several charts in the last year or so. (Perhaps it should be described here as the Columbia Records label group, since it includes such imprints as Ruffhouse, Track Masters, So So Def, C2, and Xtravaganza.) Country music is excluded -- in the music business, that's a separate entity -- but Platinum Hits 2000 (the title is a gross exaggeration, of course) covers a wide range, from hip-hop to folk-rock, demonstrating not only Columbia's diversity, but also the label's ability to generate hits for disparate performers. Seven Top Ten pop hits are featured, among them the chart-toppers "Doo Wop (That Thing)," by Lauryn Hill (a bit long in the tooth, dating back to August 1998) and "Say My Name," by Destiny's Child. There are also six Top Ten R&B hits, four of which hit number one -- "Say My Name," Maxwell's "Fortunate," Jagged Edge's "Let's Get Married," and Lil' Bow Wow's "Bounce with Me," which fortuitously hit the top of the chart the week Platinum Hits 2000 was released and prior to the issuance of the artist's own album containing it. Among the other notable tracks on the album are Will Smith's entertainingly boastful rap "Freakin' It," Jessica Simpson's teen pop anthem "I Wanna Love You Forever," Mary Mary's gospel-soaked breakthrough "Shackles (Praise You)," Shawn Mullins' sardonic hit "Lullaby," and the British dance-pop sensation "Don't Give Up," by Chicane featuring an unrecognizable Bryan Adams on vocals. Such stylistically conflicting recordings manage to work together on the same compilation largely because of a lot of dance remixes that keep the beat going no matter the kind of music and because of clever sequencing that, like a good club/dance set, may cause the listener to reconsider a song previously dismissed. In reality, there's nothing tying these tracks together but the big record label they come from, and yet the album hangs together, which is an accomplishment. 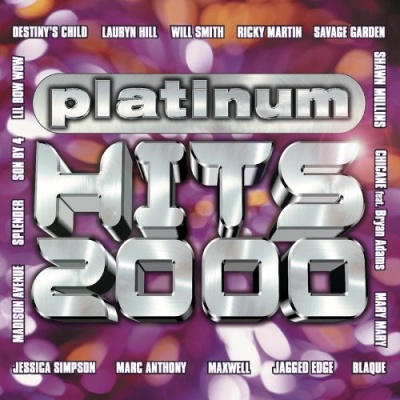