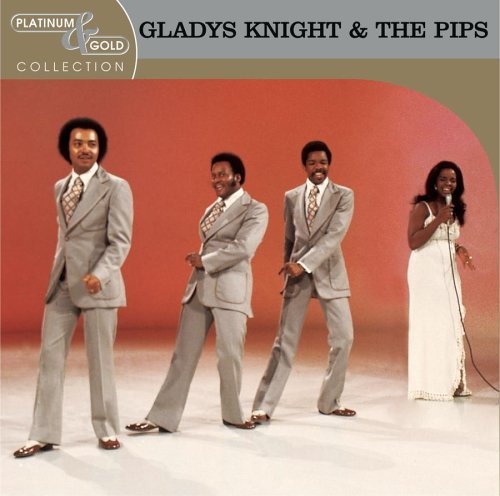 Gladys Knight & the Pips' Platinum & Gold Collection gathers songs from two very different periods in the group's career. Two of the tracks included are from the very start: "Every Beat of My Heart" and "Letter Full of Tears" are from 1961 and feature the group singing in a doo wop-meets-girl group style, Knight sounding very strong on the Don Covay-penned "Letter Full of Tears." The rest of the disc is made up of the group's stay with Buddah Records, which they signed with after leaving Motown in 1973. Their first couple of years with the label found them sustaining a high level of success. Included on the collection are their only number one hit, 1973's "Midnight Train to Georgia," and near chart-toppers 1973's "I've Got to Use My Imagination," 1974's "The Best Thing That Ever Happened to Me," and 1974's Curtis Mayfield-written and -produced "On and On" from the smash soundtrack to the forgotten film Claudine. The group had a few middling hits, like a funky take on the soul rebel Eugene McDaniels' acidic "Money" and a syrupy version of "The Way We Were/Try to Remember" (later sampled by the Wu-Tang Clan), and made a foray into disco with the Van McCoy-produced "Baby Don't Change Your Mind" and Tony Macaulay's "It's Better Than Good Time." Platinum & Gold Collection does a fine job of documenting the later period of the Pips, the music is top-notch, and Knight shows herself to be one of the great underrated soul singers of her time. It also hits just the high points of their early days, certainly enough to get the picture. This is a fine way for the budget-minded fan to get ahold of some classic soul. (If you are willing to spend a couple bucks more, however, Hip-O's Essential Collection from 1999 has the best eight of the 12 songs on Platinum & Gold as well as Motown songs and some later tracks, too. It is the best single-disc Gladys Knight & the Pips collection available.)