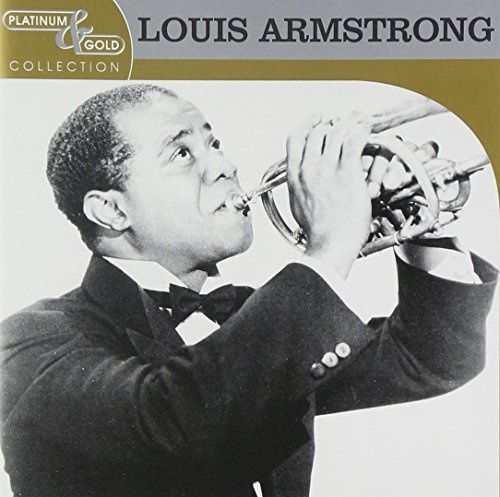 Louis Armstrong's later work in the '30s, '40s, and beyond has usually taken a critical backseat to his earlier material recorded with the Hot Fives and Hot Sevens in the '20s. It could be argued, however, that his later work, while no longer revolutionary, was more accessible to the general public who appreciated his vocals as much as his trumpet playing. Platinum and Gold Collection reaches back into the Bluebird vault to collect a sampling of Armstrong's music from two separate periods: the first, orchestra recordings dating back to 1933, represented by gems like "I've Got the World on a String," and the second, smaller group recordings from 1946-47, featuring favorites like "Pennies From Heaven." Most of the cuts equally balance Armstrong's singing and playing, and the two time periods blend well. If the latter material gets a slight nod it's because Satchmo gets to match musical wits with the likes of pianist Billy Strayhorn, alto Johnny Hodges, and trombonist Jack Teagarden. There's a fine take on Maceo Pinkard's "Sugar," kicking off with a lovely trumpet solo, and a winning version of "Ain't Misbehavin'" with Armstrong's trademark vocal treatment. Platinum and Gold Collection offers a good one-stop collection to check out two productive periods for Armstrong, and also a good place to trace the steps of an artist who kept making changes to keep his sound fresh.