For Tim Burton's "reimagining" of Planet of the Apes, Danny Elfman produced a dynamic, thundering score filled with powerhouse brass and percussion. Fundamentally based around a rising three-note motif, the score opens with the extended "Main Titles," then launches straight into the standout "Ape Suite #1," an overture-like introduction to the main elements of the score. Another terrific cue is "The Hunt," a whirling descent into the heart of the story filled with jungle rhythms and battling brass and underscored by throbbing electronics. Unlike Jerry Goldsmith's groundbreaking score for the original Planet of the Apes, Elfman's music remains centered around a tonal base, branching into some extended percussion passages but never breaking into the atonality that was so effective in Goldsmith's work. A few quiet moments occur between orchestral eruptions, but this is primarily loud, propulsive action music. Only Paul Oakenfold's "Rule the Planet Remix" seems out of place. 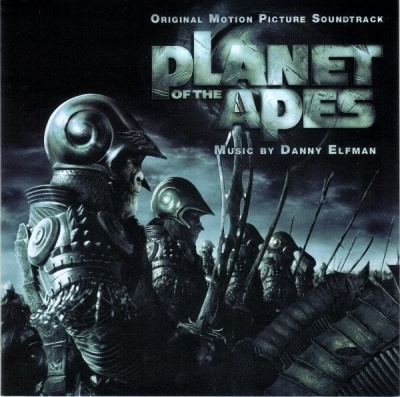