Recording has rarely come easy for Kelly Clarkson. The classic example of this trouble is My December, the album where she attempted to break away from her American Idol benefactors to find her own way, but 2015's Piece by Piece bears signs of a potentially rocky creation. At the very least, its gleaming surface is evidence that during the four-year hiatus between 2011's Stronger and this 2015 release, she and 19/BMG spent considerable time figuring out which direction she should pursue as she entered the second phase of her career. Instead of consolidating the assured mature pop of Stronger, Piece by Piece refurbishes Kelly, piling on EDM affectations and finding her singing cuts co-written by such successful contemporary pop hitmakers as Sia ("Invincible"), Matthew Koma ("Someone"), and MoZella ("Take You High") on an album largely produced by Greg Kurstin, who has had hits with Sia, Tegan and Sara, Ellie Goulding, and Lily Allen. Previously, Kurstin proved to be a good fit for Kelly -- he produced three cuts on Stronger, including its title track -- but Piece by Piece often makes the cardinal mistake of so many botched albums by pop divas: it places the emphasis on sound, not song. This decision tends to submerge Clarkson, who performs as powerfully as ever but is nevertheless overwhelmed by skittish beats, fragmented samples, and electronic sheen. Her receding presence unfortunately is mirrored by the lack of songwriting credits -- she has just three on the standard edition of the album, half of what she had last time around -- and it's also not true that only the tunes she had a hand with are the ones that work: Sia's "Let Your Tears Fall" has an appealing nocturnal pulse, "Good Goes the Bye" floats upon its percolating beats, and "Nostalgic" is a nifty piece of neo-new wave. These cuts, along with the title track, manage to strike the right balance of Kelly's indomitable character and fresh electronic beats but overall Piece by Piece sounds a shade too desperate, which means it winds up having the opposite effect than intended: instead of sounding like a new start, Clarkson sounds a little bit behind the times. 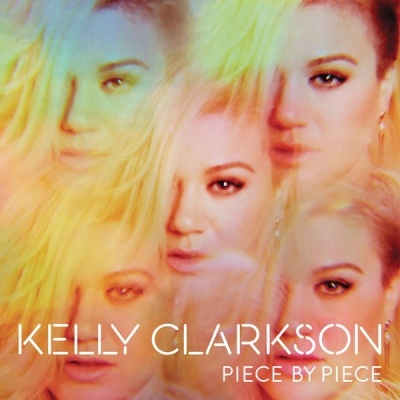