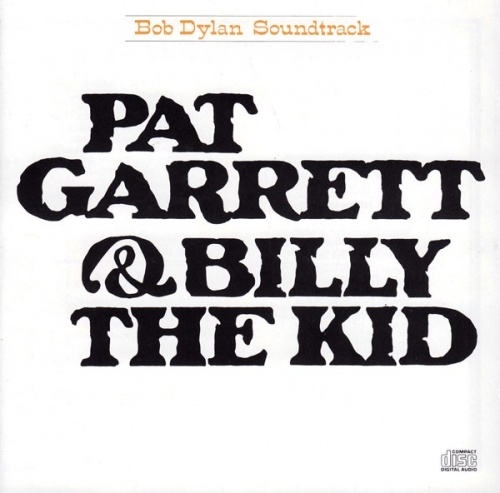 This album was unusual on several counts. For starters, it was a soundtrack (for Sam Peckinpah's movie of the same title), a first venture of its kind for Bob Dylan. For another, it was Dylan's first new LP in three years -- he hadn't been heard from in any form other than the single "George Jackson," his appearance at the Bangladesh benefit concert in 1971, in all of that time. Finally, it came out at an odd moment of juxtaposition in pop culture history, appearing in July 1973 on the same date as the release of Paul McCartney's own first prominent venture into film music, on the Live and Let Die soundtrack (the Beatles bassist had previously scored The Family Way, a British project overlooked amid the frenzy of the Beatles' success). Interestingly, each effort reunited the artist with a significant musician/collaborator from his respective past: McCartney with producer George Martin and Dylan with guitarist Bruce Langhorne, who'd played with him on his early albums up to Bringing It All Back Home, before being supplanted by Mike Bloomfield, et al. But that was where the similarities between the two projects ended -- apart from the title song, Live and Let Die was Martin's project rather than McCartney's, whereas Dylan was all over Pat Garrett & Billy the Kid as a composer, musician, etc. Additionally, whereas McCartney's work was a piece of pure pop-oriented rock in connection with a crowd-pleasing action-fantasy film, Dylan's work comprised an entire LP, and the resulting album was a beautifully simple, sometimes rough-at-the-edges and sometimes gently refined piece of country- and folk-influenced rock, devised to underscore a very serious historical film by one of the movies' great directorial stylists. It was also as strong as any of his recent albums, featuring not just Langhorne but also such luminaries as Booker T. Jones, Roger McGuinn, and Byron Berline. "Knockin' on Heaven's Door" was the obvious hit off the album, and helped drive the sales, but "Billy 1," "Billy 4," and "Billy 7" were good songs, too -- had any of them shown up on bootlegs, they'd have kept the Dylan semiologists and hagiographers busy for years working over them. The instrumentals surrounding them were also worth hearing as manifestations of Dylan's music-making; "Bunkhouse Theme" was downright gorgeous. It was the first time since New Morning, in 1970, that Dylan had released more than five minutes of new music at once, and it was a gift to fans as well as to Peckinpah -- little did anyone realize at the time that it heralded a period of new recording and a national tour (with the Band), along with a brief label switch, and Dylan's greatest period of sustained musical visibility since 1966. This record also proved that Dylan could shoehorn his music within the requirements of a movie score without compromising its content or quality, something that only the Beatles, unique among rock artists, had really managed to do up to that time, and that was in their own movie, A Hard Day's Night. "Knockin' on Heaven's Door" may have been the biggest hit to come out of a Western in at least 21 years, since Dimitri Tiomkin and Ned Washington had given "High Noon" to Tex Ritter to sing in Fred Zinnemann's High Noon in 1952 (and Katy Jurado was in both movies), and he'd also outdone Ritter on two counts, writing the music -- a full score, to boot -- and getting a cameo appearance in the film. The album was later kind of overlooked and neglected in the wake of the tour that followed and the imposing musical attributes of, say, Blood on the Tracks and Desire, but heard on its own terms it holds up 30-plus years later.