It's been two years since the Gipsy Kings' masterpiece Roots, an album where they kissed big, extravagant production, as well as big drums and keyboards, goodbye. Apparently old habits are hard to break. On the cover of 2007's Pasajero, the Kings look back to the natural thang. They are posed on a picnic table in the middle of some wild grass and trees, playing together, laughing, and singing. Covers can be deceiving, and this is one of them. Pasajero is a big return to glossy sound, extravagant production, big drums, dub bass, and electronic programming and percussion. There's no problem if you dig your Kings that way, of course. The group lays down impeccable nuevo flamenco fusion with all sorts of world traditions, such as reggae on "Pueblos," with a splashy horn section playing in fine dub-cum-mariachi style and a bubbling bassline over the drums. The Reyes family knows what it wants, apparently, as the horns and keyboards dig deeper into both reggae and son grooves on "Mira la Chica." Not only do they not give up their danceable edge, they seem intent on making it so pronounced that it overrules everything else. The raw vocals are there, but they seem at odds with the sheen of the production by Philippe Eidel and the Kings.

The return to the slicker stylings and the integration of more forms are utterly comprehensible when one considers how much Latin popular music has changed in the past couple of years. The Kings are used to being on top of the charts, and they aren't about to throw in the towel to go back to folk music. That said, there are rootsy tunes here, though they are in the minority. That doesn't mean this record is a loss: far from it. On "Café," the band (with Eidel on accordion) goes backward, strutting through a joyous singalong son. "Canastero" is a mid-tempo ballad full of passion, pathos, and the kind of longing that's hard to find anywhere but in the Kings' best songs. One of the more experimental tunes, "Sol y Luna," features the upright bass playing of Bernard Paganotti (he's amazing throughout the album), and also a shimmering kit drum played by Patrice Renson, with Ava Saty's duduk playing a stunning little melody throughout this heady romantic tune. It may, in fact, be the finest moment on the record -- and an all too brief one. The percussion and upright bass playing on "Guaranga" are fine ballast for the fiery flamenco guitaristry on the instrumental. In sum, Pasajero is a mixed bag, in terms of an eclectic mix of tunes. The big-band numbers don't work quite so well, but they aren't in the majority here either. [Pasajero was re-released in 2007 on Nonesuch as an enhanced CD with bonus video footage] 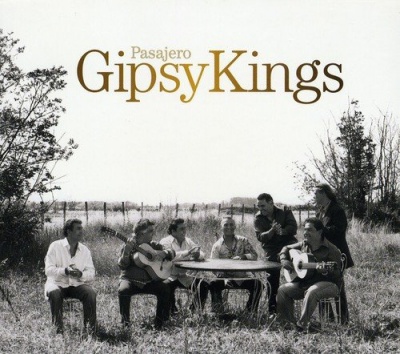