There are moments on Paperwork where rapper T.I. sounds as vital, bright, infectious, and tuneful as Nas in his prime, but don't get it twisted, as this vibrant effort is often so pop that it is more like an Illmatic aimed at taking on the chart dominance of Iggy Azalea and not the gang violence in Queensbridge. Fair enough, and a target well within T.I.'s means, plus the fire in rapper's belly is stoked by executive producer Pharrell Williams here, the man who persuaded the rapper to move his Grand Hustle empire to the Columbia family of labels and live in the big and bold world of the Neptunes and their ilk. The results are gospel-seized numbers like "Oh Yeah," where a choir underlines T.I.'s urgent stories of bad luck and surviving in the hustle, or "New National Anthem" with Skylar Grey, a number as brave as its title, where mothers lose their children to the perils of the modern world and Trayvon is killed holding nothing but a pack of Skittles. "About the Money" returns this mid 1930s mobster back to his early, scrappy days with a bragging track modeled after the twitchy sound of Danny Brown, then "No Mediocre" proves T.I. can flourish on the modern, ultra-slick strip club number -- and with snarky Barbie Iggy Azalea right by his side. Toward the end there's the sincere "Light 'Em Up (RIP Doe B)," where Grand Hustle's fallen soldier is eulogized with soul and spiritual hope, plus the great "Let Your Heart Go (Break My Soul)" is an open-hearted, lush, and fitting climax for an album so varied yet whole. Bright, big, and Pharrellian, Paperwork still finds T.I. at the center of its well-funded variety show, allowing him to bounce back to his streety Trouble Man persona after schooling all the Iggy's and Macklemore's in such vital uptown slick. 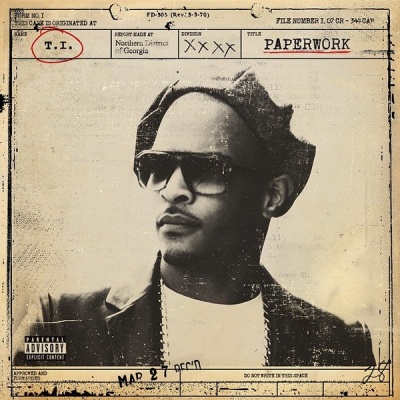