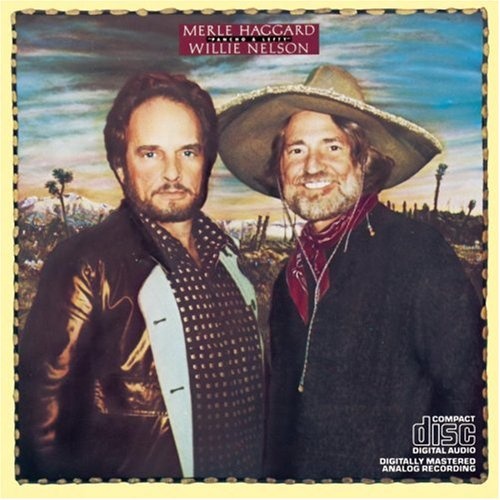 On Pancho & Lefty, their first album together, Merle Haggard and Willie Nelson managed a rare feat: an album by two legends that lives up to, and at one point exceeds, expectations. In 1982, both artists were at the top of their game, Haggard just having released a great comeback album in Big City, and Nelson in the midst of a creative and commercial peak. The centerpiece of the album is the title track. Penned by Texas songwriter Townes Van Zandt, the ballad of two renegades and the respect they earned from the law is the perfect vehicle for Haggard and Nelson, both of whom managed to achieve legendary status in spite of being outsiders to the Nashville establishment. The song's production enhances its power; it is polished without becoming slick (note Nelson's double-tracked guitar solo), and there's power in reserve -- in the wrong hands, this could easily have become a bombastic, over the top performance. Nothing else on the album comes close to the majesty of "Pancho and Lefty." That's not to say that the rest is not good, though. The other songs are all relaxed ruminations on life, from the joys of taking it easy on the throwaway "It's My Lazy Day" to the pain of love lost on Nelson's chestnut "Half a Man." Throughout, Haggard and Nelson duet in equal measure; one gets the sense that this is a collaboration in every sense. The sequence of "Reasons to Quit" and "No Reason to Quit" is an inspired bit of programming, both honky tonk songs of the first rank. Pancho & Lefty was followed in 1987 by Seashores of Old Mexico, a far less successful collaboration.