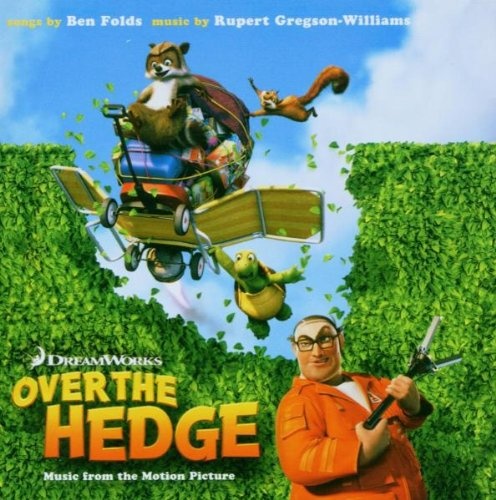 With bright, brassy songs by Ben Folds and Rupert Gregson-Williams' playful but surprisingly tense orchestral score, the soundtrack to DreamWorks' film adaptation of the comic strip Over the Hedge strikes a good balance between traditional film music and pop. Gregson-Williams' pieces capture a lot of moods, sometimes all in one track: the twinkling, bustling feel of "The Family Awakens" evokes the manicured suburban jungle that the film's former forest creatures find themselves in, while "Play?" is a brief but lively piece of comical chase music. "Let's Call It Steve" is a standout, moving from quiet and slightly spooky to full-blown action music. Consisting of mostly energetic pieces like these and "Hammy Time," Gregson-Williams' score is remarkably unsentimental. In fact, most of Over the Hedge's emotional moments come from Folds' songs. "Family of Me" and "Still" are well-written and sweet without being saccharine, even if the strings on both tracks are a little overdone. Folds could've been picked to contribute songs to this soundtrack just because of his hit "Rockin' the Suburbs," but his quirky mix of humor and sentimentality works well here, especially on the more upbeat songs like "Heist." Versions of the Clash's "Lost in the Supermarket" and his own "Rockin' the Suburbs" -- which features a Has Been-like cameo from William Shatner (who voices Ozzie the Opossum in the movie) as a frantic suburbanite -- add a dash of hipness to the album. Over the Hedge is smart enough for parents and fun enough for kids; it's refreshing when a family film soundtrack like this comes along every once in a while.