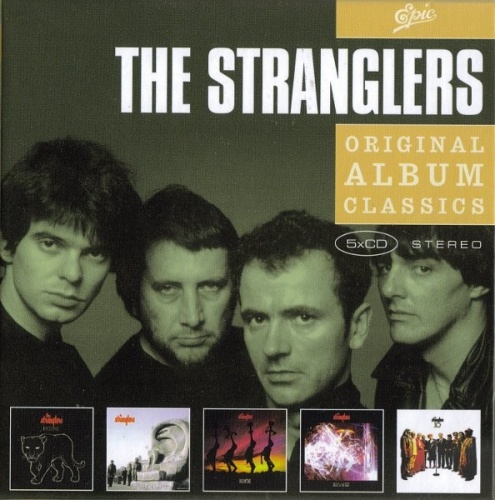 The Original Album Classics series by Sony BMG in Germany is an attempt to clear shelves of catalog titles that are lying about, but it inadvertently provides a great opportunity for those who have developed a sincere interest in a band via a greatest-hits comp but have yet to score any actual titles. These budget-priced, chronologically compiled, completely remastered collections feature full-length albums -- in this case five studio albums by the Stranglers. That said, almost anyone would be hard-pressed to call the quintet of albums collected here "classics" in any sense of the word. Chronologically, they begin with 1983's Feline, the album that followed 1981's Meninblack. The set was a mixed bag and received some adequate if not overly positive reviews. Its follow-up, Aural Sculpture issued in 1984, was received positively, however, and that set belongs in the band's top five, replacing the aforementioned Meninblack. The rest of the records here are among the band's very worst, including Dreamtime, All Live and All of the Night, and 10. In other words, with one exception these records are the worst from the original Stranglers. Only hardcore fans need seek these out, even for the price tag.