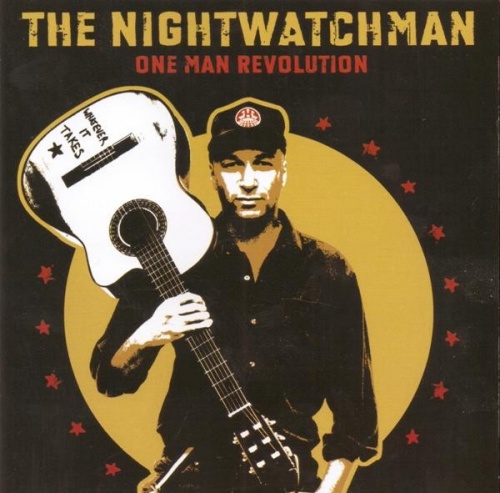 In the space between Chris Cornell leaving Audioslave and Rage Against the Machine reuniting, Tom Morello released a solo album under the name the Nightwatchman. One Man Revolution, as it's called, is comprised of socially and politically critical acoustic folk songs, some of which were written as early as 2003 (including the first single, "The Road I Must Travel"), when Morello first began performing alone. These are musically simple pieces, borrowing from early Dylan and Springsteen, where two or three strummed chords are all that are needed to properly display the stories told. The melodies, like many folk melodies, are familiar ("Let Freedom Ring" even sounds an awful lot like "Wayfaring Stranger" at times), but Morello's not aiming for intricacy and innovation here. Instead, he's attempting to be, and succeeding at being, to quote Rage, a "Voice for the Voiceless." He's concerned with the circumstances of others, of the downtrodden and the under-represented, of a general uprising of the oppressed, and so his words focus on this, on the characters he creates. His lyrics aren't overly complicated -- simple rhyme-scheme and imagery dominate -- but they're highly detailed and affective because of it. He's not trying to give in-depth commentary on globalization or terrorism; rather, he concentrates on the effects these things have on normal citizens, the factory workers, the young soldiers, the teachers. Morello's is a land of simple metaphors, nearly Manichean, where dark is bad and light is good ("We pray the sun will come up," he sings in "California's Dark," and this sentiment is echoed frequently throughout the rest of the album). But this doesn't mean that he makes everything seem clear-cut, with clean designations between right and wrong. Sometimes, like in "Battle Hymns" and "The Garden of Gethsemane," Morello sings from the perspective of the antagonist, the "reaper, executioner/Hangman, judge, and the law," the man who "saw things [he] should not see." It's not that he's espousing ambiguity -- there's certainly a strong and sure moral compass guiding him here -- but he understands that the darker side exists. Perhaps because of this, this acknowledgement of the gray area, One Man Revolution isn't as full of spitfire and indignation as one might imagine. Yes, Morello can get angry, and yes, he sometimes growls, but he's also compassionate and hopeful and energetic; he's showing off the blue-collar ethic he and many folksingers before him have championed and cherished, advocating for change, and maybe because he isn't screaming, his voice is all the more clearly heard.