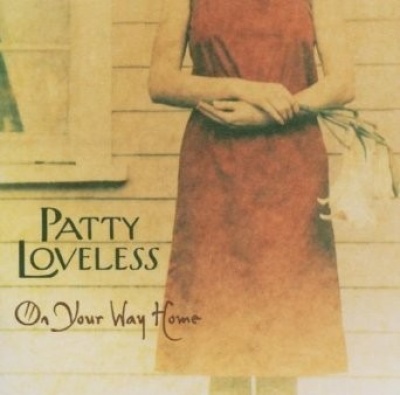 Who says country music is dead? Patty Loveless and her producer, husband Emory Gordy, Jr. obviously don't give a damn about what's popular in the morally reprehensible and artistically bankrupt world of Nash Vegas (anti)culture this week. On Your Way Home picks up where the rootsy heart of Loveless' awesome Mountain Soul left off -- with a solid, emotionally moving, honestly delivered set of honest-to-God country songs written by fine contemporary songwriters. These 11 songs lend a glimmering hope that the major labels in the heart of the beast of modern country haven't been totally swallowed by aesthetic greedy blindness. The album opens with "Draggin' My Heart Around," by Paul Kennerley and Marty Stuart, full of guitars -- both acoustic and electric, caressed by a lonesome fiddle and pedal steel, and a honky tonk two-step rhythm. The tale is classic, about a man doing his woman wrong and the woman in near despair, but the delivery is up-tempo and defiant. The old folksy mountain groan that opens "Nothin' but the Lonely," a seemingly transformed old fiddle tune, takes the listener back to a time out of space, a color out of time, a place where the song revealed someone's truth. Not their production values. And then there's that sheen of country boogie and rockabilly in the Al Anderson/Gary Nicholson/Jessie Alexander-penned "I Wanna Believe," driven as much by a pair of fiddles as an electric guitar and a subtle double-time beat. As for ballads, like the title track, leave it to Matraca Berg and whomever she happens to be writing with -- in this case the wonderful Ronnie Samoset -- to deliver the consummate broken yet determined break-up song every time. In Loveless' voice, this song is an issue of profound truth for the protagonist; she is the one waiting up for the lies and excuses. In fact, in each of these songs Loveless offers everyday life as episodic revelation and epiphany. Her voice is a full million miles deep, full of mystery, pathos, and a hard-won tenderness. Nowhere is this more evident than in Roger Brown's Celtic-flavored country waltz "Born Again Fool." Here Loveless is the storyteller, offering both empathy and plainspoken wisdom about a man who actually believes a woman can save him from himself. There is no "I told you so" doublespeak here, and both people in the tale contain elements of victimization and perpetration. The shuffling honky tonk of "Lookin' for a Heartache" -- written by Jim Lauderdale with Buddy and Julie Miller -- swings with pure Texas aplomb. Likewise, Rodney Crowell's "Lovin' All Night" is shuffling, scuffling rootsy rock & roll disguised as up-tempo honky tonk. The final song on the disc, "The Grandpa I Know," is caressed by a dobro and mandolins and falls like a prayer from Loveless' mouth. Turning away from the shell left by a recently departed loved one is disregarded in favor of vibrant, reverent memory. In a lesser singer's voice, this cut might seem corny or superficial; in that loose, untamable grain in Loveless' instrument, it is an epitaph that holds the story of an entire life. Ultimately, On Your Way Home is further proof that in her midforties, Loveless is a singer who has just reached the pinnacle of musical and artistic greatness she has worked so hard for and has become a vocalist entitled to a legacy in the rich lineage of historic country music. It's alive and well in her care.