Third Day quickly draws a distinction between entertaining and leading worship on Offerings. "King of Kings" starts the release with a fervent longing to know God. "Who is this King of glory with strength and majesty, and wisdom beyond measure, the gracious King of kings." Mac Powell raises the tune to a fervent pitch as the members from Atlanta's Cobb County Mass Choir join in to help the cut reach its pinnacle. "Agnus Dei/Worthy" was written by Michael W. Smith and has been a focal point at Third Day concerts over the past few years. It's easy to see why; the lyrics are inspiring, the energy level high. After distorted guitars and hard hitting drums the song becomes an acoustic sing along as thousands join the band in praise. "Your Everywhere" was written during the Conspiracy No. 5 sessions but the cut never made the release. The tune is a poignant ballad that displays the bands heartfelt passion. Both "Thief" and "Consuming Fire" have been live Third Day staples since the bands inception. "Thief" tells the account of the criminals crucified with Christ. This piano driven melody is emotionally potent. Equally engaging is "Consuming Fire," which was responsible for launching the band in 1996. You can feel the electricity as Tai Anderson's bass riffs reverberate throughout the arena. Closing Offerings is arguably the most requested Third Day song. "Love Song," and is an acoustic gem. The tune reveals the fragile nuances that make Third Day much more than entertainers, and the song is sung by the band's faithful word for word. 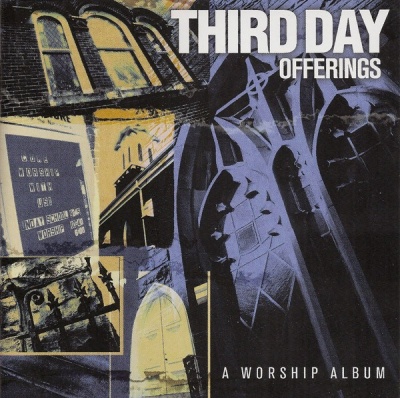