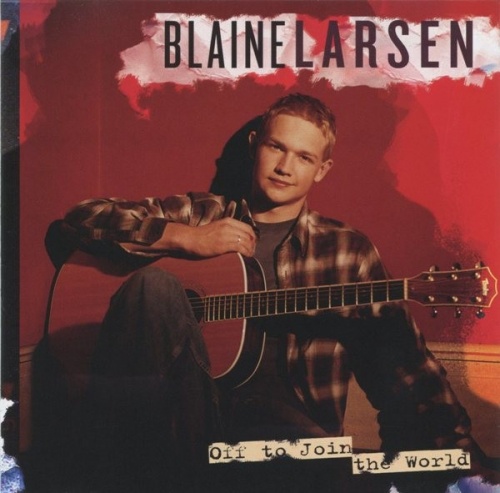 Looking at the cover of Blaine Larsen's 2005 major-label debut Off to Join the World -- which is a reconfigured version of his first album, In My High School, released on an indie about six months before Off -- it's easy to think that the youthful, clean-cut singer is about 14-years-old, a cloying novelty along the lines of Billy Gilman. First impressions are often misleading, as the music on this lean 11-track album makes clear. Larsen possesses a rich, full baritone reminiscent of his idol George Strait -- a sound that sure shouldn't be coming from a kid who looks like he's yet to learn how to shave. Preternaturally gifted youngsters are not uncommon in country music -- for instance, LeAnn Rimes came storming on to the scene at the age of 14, sounding like a dead ringer for Patsy Cline, and Tanya Tucker started her career when she was 13 -- but often the raw talent isn't yet supported by technique. That's not the case with Larsen. He knows how to deliver a song, whether it's ramping up the sentiment or slyly tossing off a punchline, which is something that does not come easily to young singers, as any regular viewer of American Idol can attest. Larsen not only has that technique down, but he has excellent taste, sticking to the straight-ahead neo-traditionalist country that made Strait a star, writing and picking hooky, memorable songs. Some of these tunes have more than their fair share of country corn, but they're so unapologetic and spirited, they're quite charming, as is the whole of Off to Join the World. Blaine Larsen may not have quite yet broken free of his influences on this debut, but he sounds as if he's absorbed their lessons, beginning to turn what he's learned from Strait, Alan Jackson and Merle Haggard into something of his own, both as a vocalist and a fledgling songwriter (he's penned just over half of the songs here, and there's not a bad tune in the bunch). In the process, he's delivered a terrific debut album, one that qualifies as a totally unexpected and wholly enjoyable surprise.