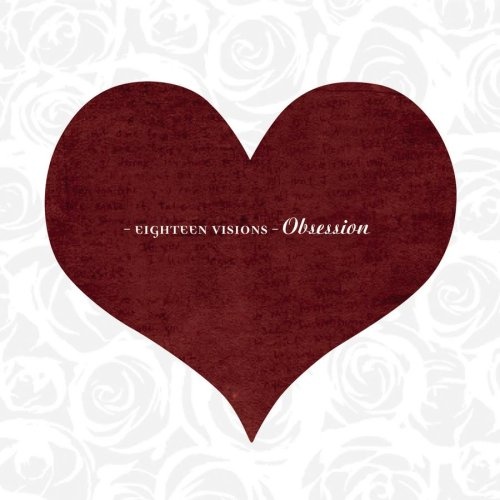 Eighteen Visions really get the treatment on Obsession, their third full-length for Trustkill. Die-cut heart-shaped box slider, accompanying DVD, an elaborate booklet with evocative, story-based sepia photography -- yep, there was some money spent here. Obsession's music reflects this exposure, too -- it's a million years and a thousand ways from Until the Ink Runs Out. Eighteen Visions have moved consciously into that shadowy realm, the one where the iron poles of metal beat against hardcore spines, and hammer the resulting screams into melodies lanced with pain. It's the new obsession for young men. For 18V in 2004, what prefix lies in front of the "-core"? Unclear. When will the kids grow tired of busy packaging and tunic-rending first-person lyrics ("I've been sleeping here for days/Hope I die before my dreams drive me insane," from "Lost in a Dream")? Who knows. In the meantime, congratulate 18V on making a record that loses itself in the possibilities offered by that weird region of genres in spiky flux. "Tower of Snakes" is a roaring Deftones tribute; "I Let Go" and "Crushed" offer thick yet mainstream-accessible metalcore (the production of Mudrock here is mighty); and "I Should Tell You," absolutely incredibly, is a sipping-coffee-in-the-veranda weeper, softer than the softest Hoobastank ballad. "I watched the falling rain splash upon your face," James Hart says in his best bedroom voice, and keyboards hiss in the distance for effect. As weird as "Tell You"'s detour into comfy sweatpants and Kleenex is, its rider, "Waiting for Heavens," is -- mercifully -- a much better cross of melody and punishing flat-arc distortion. Think Sparta. In the end, Obsession is more than a little schizophrenic. But as that condition seems to be the disorder of the day, at least Eighteen Visions swallow their crazy pills with zesty relish.