At the same time that Epic Records released the sixth volume of the American edition of the various artists hits series, Now That's What I Call Music!, Billboard was reporting that sales of singles were down 42.8% from the previous year. Sales of the previous releases in the Now series were increasing, according to the press release accompanying the album: Now 1 had sold nearly two million copies; Now 2 and Now 3 were double platinum; Now 4 had entered the charts at number one; and Now 5, less than five months old, was quadruple platinum. These facts are not unrelated, of course. Music fans, especially young ones, may be as interested as ever in individual tracks instead of albums, but the major record labels continue to try to drive them toward albums, with their higher prices. The labels have cut back on singles releases and limited the availability of the singles they have released. But the Now series, a rare instance of record company cooperation (this one features tracks from Sony, Universal, EMI, and the Zomba Group, which includes Jive and thus Britney Spears, 'N Sync, and the Backstreet Boys), satisfies the desire for the hit songs and results in album sales. Most important, the albums do not cannibalize sales of the acts' albums: "According to consumer research," reads the press release, "more than 50% of those who purchase a Now album will subsequently purchase an album by one of the participating artists." In this wondrous marketing environment, one can only note that Now 6 is a schizophrenic compilation beginning with dance-pop, followed by rhythm ballads, modern rock, and mainstream rock, most of it mediocre at best. Putting the CD player on repeat is recommended, so that Everclear's comment "never liked disco" can be followed by dance-happy Britney Spears. 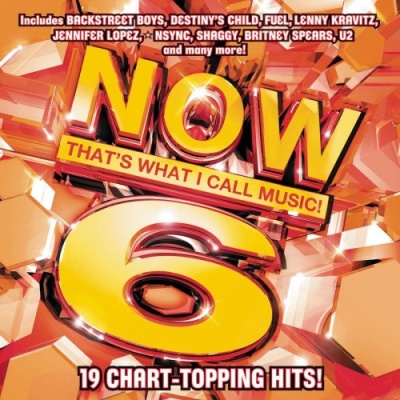