Nobody's Got It All Review

Columbia Records, which signed John Anderson to his fifth major-label affiliation in 2000, must figure that it is once again time for the veteran country singer to make one of his comebacks. Anderson struggled early in his career until early 1981, when he began a string of hits with "1959." He cooled off in the mid-'80s, switched labels several times, and returned to the top of the charts in 1992 with "Straight Tequila Night," leading to another string of hits that lasted into 1995. Another couple of label switches landed him at Columbia for the 2000 chart single "Nobody's Got It All," followed by this identically titled album, his first new collection in nearly four years. But in or out of commercial favor, Anderson takes pretty much the same approach. His up-tempo songs have a honky-tonk feel, but he really shines on the ballads, which prominently feature steel guitar and fiddle in traditional country style. It's his voice, a vulnerable, slightly wheezy tenor, that works better on the slow material, whether it's a typically sentimental, quasi-religious country tearjerker like "The Call" or one of Anderson's many conservative reflections on how much better life used to be, such as "I Ain't Afraid of Dying." Producers Blake Chancey and Paul Worley (country's hottest production team of the late '90s, due to their work with the Dixie Chicks) try to vary things, having Anderson turn nearly comic on "The Big Revival" and reach for crossover with Bruce Springsteen's "Atlantic City" (which only emphasizes Anderson's vocal similarity to Levon Helm, who has recorded the same song with the Band) and giving the singer an up-tempo, horn-filled arrangement on the album's second single, "You Ain't Hurt Nothin' Yet." But the real potential hits are romantic ballads like "I Love You Again" and mid-tempo numbers like the rueful "It Ain't Easy Being Me" (with its witty tag line, "I've had to work to be the jerk I've come to be"). And a hit is what Anderson needs to turn his career around one more time. 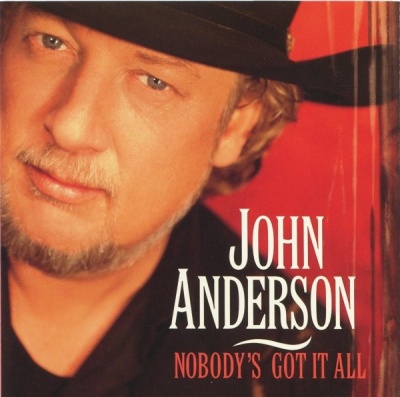 Nobody's Got It All Album Information