The 1981-1982 Broadway season boasted two solid musical hits: Dreamgirls, about a Supremes-like girl group, and Nine, based on Federico Fellini's celebrated film 81/2. When Tony Awards time arrived, the conservative theater types who make up the Tony voters gave Nine five awards, for best musical, score, director, featured actress, and costume designer, while Dreamgirls won six, for best book, choreographer, actor, actress, supporting actor, and lighting designer. This Solomon-like division sent the message that Dreamgirls was in essence a performance vehicle, while Nine was the more solid overall work. In retrospect, it seems that the Tony voters got it exactly backward. They may have been skittish about the pop/R&B pastiche that made up Henry Krieger and Tom Eyen's score for Dreamgirls and more comfortable with Maury Yeston's more traditional Broadway score for Nine, but the former has proven more memorable in the long run. (It was also the more popular at the time, with a cast album that went gold, produced a Top 40 hit, and won the Grammy, while Nine never reached the charts.) And though both shows had healthy runs, Dreamgirls ran more than twice as long. Actually, the strong points of Nine have more to do with the cast, led by Raul Julia as a confused Italian film director, and featuring nine women in his life, among them Karen Akers and Tony winner Liliane Montevecchi, than with what they are given to sing. Yeston's music is appropriately European-styled, and his lyrics are often facile, but little about them stands out without the performers and director Tommy Tune's staging to support them. While the score is enjoyable in the context of the show, it is not surprising that this music did not live outside the theater and that there have been relatively few revivals of the show since its original production. (In its original release, the cassette version of Nine [CBS Masterworks JST 38325] was an expanded version of the LP, running more than 80 minutes.) 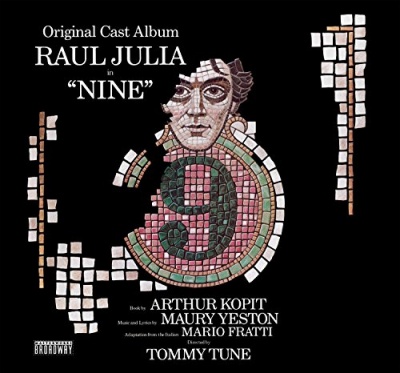