Nina Simone Sings the Blues, issued in 1967, was her RCA label debut, and was a brave departure from the material she had been recording for Phillips. Indeed, her final album for that label, High Priestess of Soul, featured the singer, pianist, and songwriter fronting a virtual orchestra. Here, Simone is backed by a pair of guitarists (Eric Gale and Rudy Stevenson), bassist (Bob Bushnell), drummer (Bernard "Pretty" Purdie), organist (Ernie Hayes), and harmonica player who doubled on saxophone (Buddy Lucas). Simone handled the piano chores. The song selection is key here. Because for all intents and purposes this is perhaps the rawest record Simone ever cut. It opens with the sultry, nocturnal, slow-burning original "Do I Move You," which doesn't beg the question but demands an answer: "Do I move you?/Are you willin'?/Do I groove you?/Is it thrillin'?/Do I soothe you?/Tell the truth now?/Do I move you?/Are you loose now?/The answer better be yeah...It pleases me...." As the guitarists slip and slide around her husky vocal, a harmonica wails in the space between, and Simone's piano is the authority, hard and purposely slow. The other tune in that vein, "In the Dark," is equally tense and unnerving; the band sounds as if it's literally sitting around as she plays and sings. There are a number of Simone signature tunes on this set, including "I Want a Little Sugar in My Bowl," "Backlash Blues," and her singular, hallmark, definitive reading of "My Man's Gone Now" from Porgy and Bess. Other notable tracks are the raucous, sexual roadhouse blues of "Buck," written by Simone's then husband Andy Stroud, and the woolly gospel blues of "Real Real," with the Hammond B-3 soaring around her vocal. The cover of Buddy Johnson's "Since I Fell for You" literally drips with ache and want. Simone also reprised her earlier performance of "House of the Rising Sun" (released on a 1962 Colpix live platter called At the Village Gate). It has more authority in this setting as a barrelhouse blues; it's fast, loud, proud, and wailing with harmonica and B-3 leading the charge. The original set closes with the slow yet sassy "Blues for Mama," ending with the same sexy strut the album began with, giving it the feel of a Möbius strip. Nina Simone Sings the Blues is a hallmark recording that endures; it deserves to be called a classic. 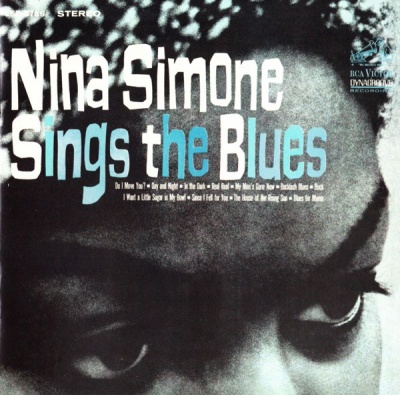