Night in the Ruts Review

By the time Aerosmith's sixth studio release was issued, 1979's Night in the Ruts, guitarist Joe Perry had finally left the band after years of drug-fueled bickering with singer Steven Tyler (forming the Joe Perry Project by year's end). Most of the tracks were completed before Perry's departure, with replacement Jimmy Crespo filling the few empty spaces. And while the band looks back upon this period as hazy and frustrating, Night in the Ruts is a surprisingly coherent and inspired album. Although it's not up to par with such classics as Toys in the Attic or Rocks (although it could have been if the band weren't in such a state of turmoil at the time), it was definitely leaner and more focused than their last studio release, Draw the Line. Highlights include the striking opening rocker, "No Surprize," which recounts the band's early history, as well the driving yet melodic "Chiquita," the jamming "Three Mile Smile," the furious "Bone to Bone," and a pair of covers -- the Yardbirds' "Think About It" and the novelty number "Reefer Head Woman." The only lowlight is a weak cover of the Shangri-Las' "Remember (Walking in the Sand)," which was inexplicably issued as a single and included on 1980's Greatest Hits. While the album performed respectfully on the charts, the ensuing tour did little to boost sales -- it was marred with canceled dates and lackluster performances brought on by Tyler's substance abuse. 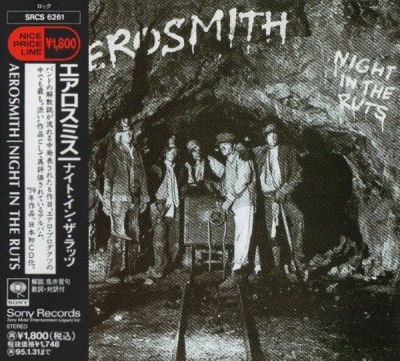 Night in the Ruts Album Information