The 2016 Vienna Philharmonic New Year's Eve Concert marked the third appearance on the podium of Latvian conductor Mariss Jansons. One wonders what this artist, who was born while his mother was on the run from the Nazis, thinks about during this event that was founded in 1939 in order to bolster the spirits of the fascists at year's end. Certainly by now all associations with World War II have been forgotten, and the concert has become a beloved tradition that must be tended without too much disruptive change. Perhaps the ascension of Gustavo Dudamel in 2017 will bring a new direction, but Jansons tries for novelty within continuity: there are no fewer than eight pieces that have never been played in the concert before, but four of those are by members of the Strauss family, and most fit firmly into the grand tradition of Viennese waltzes and polkas. The exception is the UNO-Marsch, the March of the United Nations, by Robert Stolz, who smuggled Jews out of Germany in the trunk of his car and finally fled Austria in 1939. It's hard to believe that Carl Michael Ziehrer's waltz Weaner Mad'ln, Op. 388 (Viennese Girls), one of the most tuneful pieces in the entire Viennese tradition, has never been performed before at this event, but there you have it. Favorites trotted out anew include Johann Strauss II's Vergnügungszug, Op. 281 (Pleasure Train), with its train whistles so sharply carved out that if you're listening in a car you may think you're being honked at, and elsewhere you get whistling. The live recording includes a good stretch of applause for each piece, which means that you're getting a lot of applause for your 20 bucks or Euros, but Jansons gets the requisite fun spirit that has made the New Year's Eve Concert a perennial success. 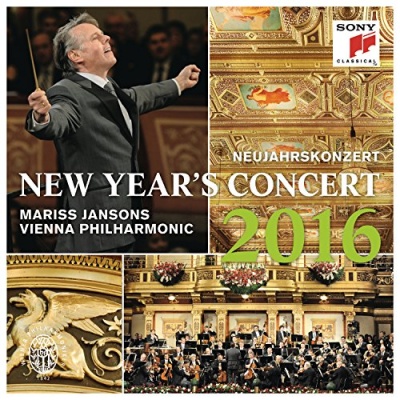