This album is considered by many to be Calamaro's best. The year of its release was one of the worst for the Argentinean rock scene. The country was involved in a critical economic situation, with an inflation that reached nearly 200% monthly! The album title really meant it: "Nobody gets out alive from here!" With this situation, it doesn't seem strange that the musical releases were almost ignored. The commercial failure of this album led Calamaro to go overseas and create Los Rodriguez in Spain. Well acclaimed by the critics, the album showed a lyrical improvement that can be heard in songs like "Señal Que Te He Perdido" (which was included in Man Ray's debut album, produced by Calamaro a year before) and "Nuestro Vietnam." The ballads were mingled with some pop-rock songs, as they are in every Calamaro album, but he incorporated some Latin flavor into it. Songs like "No tengo tiempo" and the emotional "Adiós, amigos, adiós" are a good example of this. 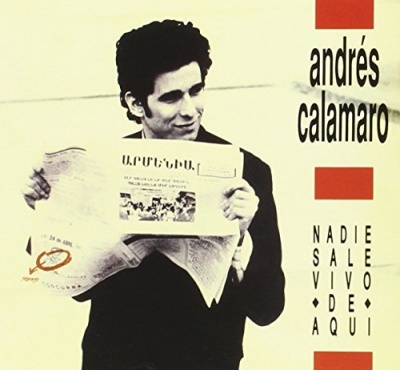