Following a hit is a tough thing for any band, and for Train, a cult band that literally came out of nowhere to land a monster single like "Drops of Jupiter" and a platinum album to boot, the pressure to deliver something "more" from label execs is intense. In addition, usually when a band decides to scrap its plans for one album and go back to the drawing board and do something else, it doesn't bode well for the finished product. Train has turned the tables on the redo jinx. Creatively, My Private Nation, Train's third album, is the moment this band has worked for since it started making records. Bringing Brendan O'Brien back on board as producer (perhaps the best rock producer out there right now) and as a co-writer on three songs, Train has upped the aesthetic ante by stripping away any notion that it has to prove that it is "sincere" as a band. The songs speak for themselves. The opening track, "Calling All Angels," which also serves as the first single, is the one song the Counting Crows wish they could still write. It's a huge rock song that signifies what the rest of the album elaborates on. Guitars, drums, backwards tracking of keyboards, and a huge chorus make it an anthem. But it's not so much how hooky and beautiful the tune is -- and is it ever -- as what it says: That in a time of great confusion, loss, and disorientation, one does not call for redemption, but asks for a sign of inspiration, for the courage to not surrender to despair. It's a tome about hope against the odds, acknowledging vulnerability, and accepting responsibility to remain focused and critical enough to win one's own redemption in everyday life, in order to become a better human being.

Other tracks -- "All American Girl," "Save the Day," and the title track -- may not feel as benevolent, especially the ones where O'Brien collaborates. These take on pop culture, social malaise, the pretension of honesty, and the selling of everything, and skewer them with acidic wit, huge monstrous guitars, and sonic architectures that defy description other than they make great rock & roll. Pat Monahan and Train don't pretend to speak for anyone; they speak about themselves in relating to the externals and internals of existence in the new century. These things include relating to each other, to their culture and generation, and to the world at large. In order to accomplish this without merely sounding the obvious, a certain degree of intimacy has to be given up in the mix, and "When I Look to the Sky," "Get to Me," "Following Rita," and the closing "I'm About to Come Alive" (one of the more honest love songs written outside of soul and country music in a decade) do just that. Under O'Brien's gorgeous multi-layered production with guitars coming from everywhere (remember how big he made Springsteen's sound on The Rising?) and strings floating and darting through the mix, chromatic shadings and the textures of contemporary psychedelia are rooted in the heart of an ambitious garage band. In other words, O'Brien doesn't make the band sound big, he gets the sound of how big Train actually is in a context that is as aurally beautiful musically as it is emotionally and lyrically poignant. My Private Nation is not an album about angst, but about transcending it and the paralyzing cynicism that goes with it. The question is, when was the last time listeners got a rock & roll album that could do that without cowering in fear of having its optimism shattered? Not in a long time. But that's because My Private Nation isn't about optimism; it's about the flickering glimmer in the darkness, in the heart, in the culture, in the world, and how it should -- and can -- be seized, right now. 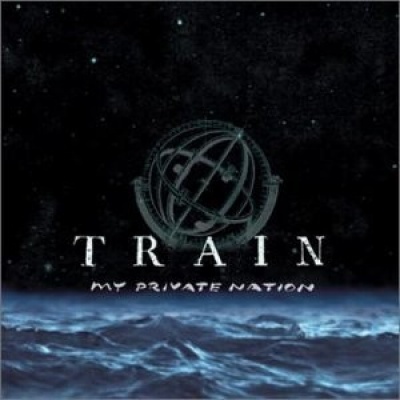