In their first CD for Sony, Charlie Brown Jr. return once more to noted producer Rick Bonadio, for the fourth time in nine studio albums since 1997. This includes the all-important first two, as well as 2005's Imunidade Musical, the first one with a completely renovated lineup -- aside from singer Chorão, of course, the undisputed leader and only member present in all of the band's incarnations. A new drummer is introduced this time around, as Bruno Gaveto replaces André Ruas, but no amount of reshuffling or controversy has fundamentally altered the band's music or its considerable success, selling millions of copies and even getting its songs into the soundtracks of a few telenovelas -- no small feat for a skate rock/punk/dub band! -- that are so insanely popular in Brazil. Bonadio is probably there to tame the band's hard edges into a radio-friendly format, more in evidence in a first half of the album that encompasses rock, reggae, and even an acoustic ballad, and features most of the album's highlights such as "Dona do Meu Pensamento" and "Me Encontra." The last third of the record, on the other hand, is taken up by several sound-alike hardcore numbers that drag a bit, including "O Dom, a Inteligência e a Voz," originally written in 2001 for the great Cássia Eller, whose untimely death prevented her from recording it. Camisa 10: Joga Bola Até na Chuva is another solid Charlie Brown Jr. album, which means it is eminently competent but not particularly original. Lyrically, Camisa 10 is a topical mixture of love songs and the urban resistance paeans to inner strength and solidarity that one finds in most ghetto music circles. Musically, there is very little here that 1980s classic Brazilian rock bands such as Titãs (also produced by Bonadio) and Os Paralamas do Sucesso (clearly their main influence) have not done first and arguably better 25 years ago. Check, for instance, "Inabalavelmente," a fine dub workout, no question about it -- but it loses part of its appeal when one realizes how much it resembles Paralamas classics such as "Selvagem." Camisa 10: Joga Bola Até na Chuva was awarded the 2010 Latin Grammy in the Best Brazilian Rock Album category. 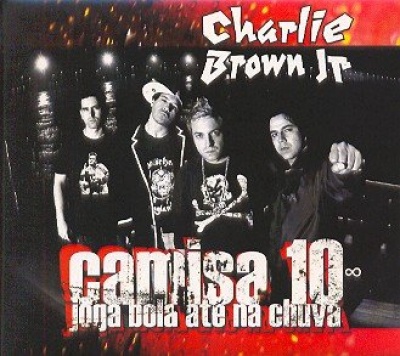