The Gossip close Music for Men with a song called "Spare Me from the Mold," but Beth Ditto, Nathan Paine, and Hannah Billie could never be accused of conforming. They were still a relatively underground group when Standing in the Way of Control's passionate mix of punk, soul, and disco became their breakthrough -- and they sounded so confident on it, it felt like the mainstream was coming to them rather than vice versa. They've got their own piece of the pop (and pop culture) mainstream now, and Music for Men feels aboveground in the best possible way. Befitting its major-label debut, this is the band's most polished music yet, a balance of Control's ferocity and the sleek remixes of the album's singles, but it's still not slick. Most of Music for Men finds the Gossip sticking to their roots and using their success to get their messages out to as many people as possible. These songs are just as empowering as their earlier work, though they're more subtly defiant. "Dimestore Diamond" opens the album with a tough-strutting anthem about a woman who's faking it till she makes it, and it's clear how much the band identifies with her, even though Ditto became an avant-garde fashion plate in the wake of Control's success. "Men in Love" sets lyrics like "we're guilty of love in the first degree" to a liberated beat and jagged guitars, and "Love and Let Love"'s chilly disco acts as armor for Ditto's heartbreak. While the Gossip still play like a band, the production often favors Ditto's voice -- not that this is a bad thing: she brings soulful fury to "8th Wonder" and much more tartness to the excellent "Love Long Distance" than a more conventional diva might (the clever chorus "I heard it through the bassline/Not much longer would you be my baby" doesn't hurt, either). However, the band still tears into "Heavy Cross" -- which sounds a lot like a slightly glossier Standing in the Way of Control track -- like the old days. This urgency drives all of these songs, whether it's the bright '80s pop of "For Keeps" or "2012"'s unlikely but captivating mix of Pat Benatar-channeling vocals and end-of-the-world drama. While it isn't quite as honed as Standing in the Way of Control, on Music for Men the Gossip sound perfectly at home in their new digs, while remaining true to their essence. 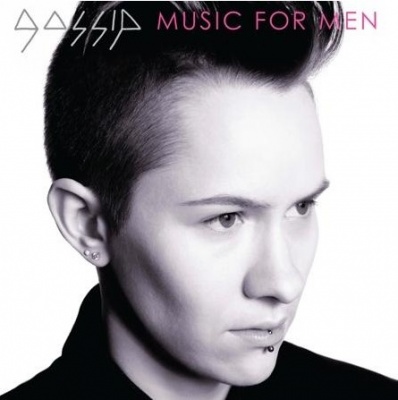